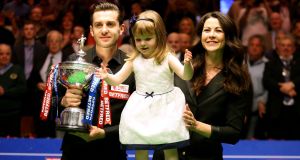 What a difference a day makes. Mark Selby, completely unrecognisable from the wan, bottomed-out facsimile of himself who trailed 10-4 at one stage during this final, recovered to win his third world championship in four years. Along with Steve Davis, Stephen Hendry and Ronnie O'Sullivan, he is now one of a select band of four players to retain the title during its fabled 40-year residency at the Crucible Theatre.

Demonstrating the kind of steel for which the host city is renowned, the 33-year-old put a hideous first day behind him but was forced to contend with late controversy and the sheer cussedness of John Higgins en route to a tense 18-15 victory.

Selby has been snooker’s No 1 player for 116 consecutive weeks now and his record £375,000 winner’s cheque means his position at the top of the world rankings is more or less cemented for another year.

“Yesterday I’d hit the wall and I had nothing left,” he said. “I was 10-4 down and thinking there was no way I was going to come back from that. I said I’d just try to make it respectable. I was thinking I could lose with a session to spare. I tried to get my act together, just tried to find something from within. To get out at 10-7 down it felt like I was in front, to be honest.”

At various stages of this final both players looked humiliation in the face and each deserves credit for staring it down to play his part in delivering a classic.

Way behind and looking exhausted towards the end of the first day, Selby drew on his fabled mental reserves to haul himself back into contention with a late-night effort that laid the foundations for his third title. A day later it was Higgins who found himself in the wringer: before potting his first red of Monday’s final session he had lost nine frames out of the previous 10, failed to score in just under an hour of play and been consigned to his chair while Selby scored 256 points without reply as he won four in a row.

Despite launching a late but ultimately futile mini-revival, Higgins will ultimately wonder how he lost a final in which his final-day highlights were restricted to breaks of 88 and 111, not to mention three consecutive long-range fouls that were as preposterously implausible as they were identical. They brought the house down at a point in the third session when the match was scrappy and mired in tedium rather than intensity.

“Mark is granite, just granite,” said Higgins, a four-times champion. “In the second session I had my chances, I missed a pink into the middle and I could have gone 9-3 ahead. That was a big, big frame. Mark cleared up under extreme pressure. He is a fantastic champion. It has been an unbelievable tournament, I gave everything. I came up short to a great champion. I’m proud of myself but he was too good on the day.”

Most had expected this final to be attritional and the refusal of both players to surrender in the face of the most intense pressure made proceedings ridiculously tense. With the match on a knife edge, an unexpected cameo from the referee, Jan Verhaas, rendered them almost unbearable. Leading 16-14 in frames and 47 points to the good in the 31st, Selby attempted a deft roll-up snooker behind the black and looked unconvinced when the Dutch official called a foul on the grounds that “I saw no contact, Mark.”

Having sportingly called for a TV replay the rules do not allow, Higgins went on to take the frame but not before Verhaas had teetered on the brink of overruling himself. Normally tasked with helping the official in the white gloves replace disturbed balls when players are put back in after a foul, his score-marker and assistant, Brendan Moore, was unable to say with certainty that cue-ball and black had caressed. Verhaas chose to stick with his original decision, one that ultimately cost Selby the frame.

“I could have swore the black moved a little bit but then Jan said it didn’t,” said Selby. “I looked up at John Parrott and Steve Davis [in the commentary box] and their first impression was ‘yes, you hit it’ and then they signalled they weren’t sure. Obviously, the referee’s decision is final and I think Jan’s probably the best we have in the game, so I respect his decision. It was tough to take but it still left me 16-15 in front. I’d have taken that yesterday at 10-4 down and I just needed to regroup.”

Regroup he did and in fine style: a break of 131 in the next frame leaving him just one from victory. He secured it at the first time of asking, clenching both fists and looking to his family and friends in the gallery following the pot that put the frame beyond Higgins and the winner into the pantheon of snooker greats.