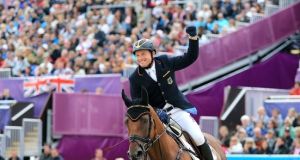 Germany’s all-conquering Michael Jung set a new record on Sunday when landing a successive hat-trick of victories on the same horse, fischerRocana FST, at the Rolex Kentucky three-day event in the United States.

The 34-year-old had a fence in hand going into the final stage of the fixture, one of just six four-star events worldwide, and needed the buffer too as fischerRocana FST, a 12-year-old German Sport Horse mare, lowered the middle element of the treble. Otherwise, she was foot perfect and the German combination went on to win on a penalty score of 42.7.

France’s Maxime Livio recorded one of just six show jumping clears to stay in second place with Qalao des Mers (44.6), a 13-year-old Selle Francais gelding, while Britain’s Zara Tindall did likewise to retain her third place position with High Kingdom (46.6). That 16-year-old Irish Sport Horse gelding by Master Imp out of the Chair Lift mare High Dolly was bred by William Micklem who stands the bay’s full-brother, Jackaroo, at his Annacrivey Stud in Co Wicklow.

The USA’s Matthew Brown dropped from fourth to sixth when BCF Super Socks, which competed in Ireland under the name Fernhill Flaxen, lowered the first fence and picked up a time fault for a completion score of 56.8. His compatriot Phillip Dutton, with just a single time fault, moved up two places to fourth on Mr Medicott (54.6), an 18-year-old ISH gelding by Cruising, just ahead of fellow American Hannah Sue Burnett who had a fence down with Under Suspection (54.8).

Disappointingly, Co Mayo native Tim Bourke, who is based in Virginia, slipped from ninth to 13th having had four fences down (plus seven time faults) with the ISH gelding Luckaun Quality (80.2), a 12-year-old gelding by OBOS Quality 004. In spite of a fence down, Aidan Keogh, who runs the equestrian products, clothing and boots company Tredstep from his south Co Dublin home, moved up from 35th to 29th with Paddy Hughes’s Master Tredstep, a 15-year-old ISH gelding by Kings Master.

The fourth leg in the FEI Classics series of four-star events commences on Thursday at Badminton where Jung rides last year’s winner La Biosthetique Sam. At present, 11 Irish combinations are due to start including Clare Abbott with Euro Prince and Jonty Evans with Cooley Rorkes Drift, who competed at last year’s Olympics in Rio de Janeiro, and Camilla Speirs with Portsize Just A Jiff, travelling reserves at the Games.

In dressage, Alana Cazabon and Zazou scored 69.958 per cent to place fifth in the FEI junior Kür (freestyle to music) at Saumur in western France on Sunday. The class was won by Theodora Livanos and Winston on a score of 73.125 per cent. Last Thursday, Cazabon and David Patrick’s 13-year-old Dutch Warmblood gelding finished second in the FEI junior team test class behind the same Greek combination.