Meet the man who catches marathon cheats . . . from his house 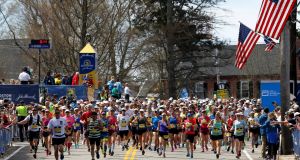 Runners from wave four cross the starting line for the 121st running of the Boston Marathon in Hopkinton, Massachusetts on April 17th. Photo: Lisa Hornak/Reuters

Just over 27,000 people ran the Boston Marathon on Easter Monday. Months of gruelling training had finally been vindicated by taking part in one of the world’s most prestigious 42.4km races.

You cannot just register, turn up and run in Boston. Men under 35 need a finish better than three hours and five minutes in an earlier marathon to earn a spot. Women under 35 have 30 extra minutes. It’s the pinnacle of any amateur’s running career.

But how many people cheated to get in? How many people committed the ultimate sporting sin of breaking the rules just for the glory of running the 121-year-old race, the opportunity to post hundreds of pictures on social media, write motivational posts, bask in the glow of all those “likes” and, ultimately, deny a legitimately deserving runner of a place?

Over 1,400km away, in Cincinnati, Ohio, a business analyst by the name of Derek Murphy is working to establish exactly that.

The 46-year-old – a former marathon runner himself – investigates and exposes marathon cheats on his blog in his spare time. He has uncovered people skipping courses, paying faster runners to compete with their bib number on and, in one bizarre case, a runner apparently boarding a train for part of the route. He estimates that between 400 and 500 people run Boston each year without having legitimately gained entry.

“I’d been following a couple of cheating stories while I was running and I began to wonder how much cheating goes on. I looked at a random race and found some straight away so that piqued my interest,” Murphy told The Irish Times.

Before the running of this year’s Boston Marathon, Murphy’s work had resulted in 15 people being denied a place on the start line after it was adjudged that they had cheated in their qualifying race. When he finds concrete evidence of somebody cheating he contacts race authorities who then deal with disqualifying the athlete in question.

Of the 15 runners mentioned, eight of these runners cut the course in their qualifying race. Seven more did not even run the race themselves, instead getting someone faster to carry their bib in order to complete the course within the time required – that way the microchip in the bib which is registered to them is picked up at the start and finish lines as well as at each split timing checkpoint along the route.

Murphy is currently analysing the data and expects to find many more who cheated in the Boston Marathon itself.

“Actually cheating at Boston is just amazing to me,” he said. “I’d think once you get to Boston you’d want to experience it.”

The cases range from the run-of-the-mill to the bizarre. One particular incident which Murphy is currently investigating from the Easter Monday race is the possibility that one runner boarded a train to cut part of the course.

In a post on his blog Murphy details an email he received from someone claiming they saw the runner get on the train at Woodlands (the 27km mark). The spectator then got off around the 40km mark to see a friend who was running in the race and, within a few minutes, saw the competitor from the train run right past.

A second email from a different spectator alleged the same thing. By analysing the data from the split time checkpoints, Murphy can see that the runner in question missed the two points which fell within the time he was on the train.

“I have a data scientist who works with me so I have it all on my spreadsheets and I’m working through that. Typically I work backwards so I look at the Boston results and based on the runner’s qualifying times I try to predict what time they should be running Boston in. I look at people who ran a lot slower and filter out and prioritise that way with people who cheated in order to get a qualifying time and then don’t run as fast as you’d expect.”

It all begs the question: why? Why do people who have nothing to gain but the pride in finishing a marathon go out of their way to falsify that result? For Murphy there is only one real reason he can see – and it all comes back to the social media age we live in.

“Social media is definitely one of the main reasons, which I found surprising. There are people who turn up to a race, don’t even run a mile, cut to the finish line to get their medal and post their pictures. So I’ve seen a lot of that. People cheating to get into Boston – that’s kind of a tangible benefit [because of the prestige] and then they can post on Facebook or Instagram saying ‘I’ve ran Boston’.”

But there is more to it than that. Tap into the seedy underworld of cheating in any sport and you will, inevitably, find some sort of money-making along the way. Whether it’s match-fixing or doping or falsifying marathon times, if there’s money to be made it will thrive.

In this case it’s not the cheats themselves who profit from it but rather the people who have spotted a way to make a quick (in marathon terms, quite literally) buck by running as “bib mules”.

These are people who will advertise on websites the service of running a marathon for you – in many cases in a quick enough time to qualify for Boston – in return for money, of course.

In one case last year Murphy exposed a French travel agency selling, as they put it: “guaranteed Boston Marathon entries”.

“When I started looking at Boston qualifiers I found that people would buy a bib for a qualifying race and then give it to somebody faster to run with their bib so that they could do a better time and get into Boston or another big race. So that’s what I call ‘bib mules’ – where someone is running either with the other person’s bib on or running with their own bib and carrying the other one.

“I came across a travel agency that was selling guaranteed Boston entries to their customers. I looked at the finish line video of a race and found the travel agency owner, as well as some others, carrying bibs for clients to try and get them qualifying times.

“And then there are people selling bibs. So somebody would run a Boston entry and then sell the bib for a profit.”

During investigations into last year’s New York Marathon he became suspicious of one runner in particular. After looking through all of the race photographs he couldn’t find any pictures of the woman in question running the race. What he did find, however, was a number of pictures of her bib number pinned to an unidentified male who was taking part in the race. Shortly after contacting race authorities the runner was disqualified and her time – which would have seen her book a place in Boston – was nullified.

Murphy says he has never been wrong in anything he’s published and, given the fact that no one has ever taken him to court (despite threats to do so), it’s hard to disagree.

Cheating will always be part of sport, whether we like it or not. There are ways to take advantage of the rules at all levels of all disciplines. But, in a suburb of Cincinnati, there is at least some sort of fightback taking place.