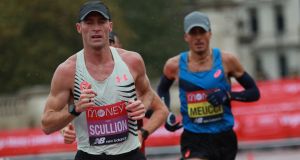 Stephen Scullion of Ireland in action during the London Marathon. Photograph: EPA

The problem with big city marathons is that conditions and the course always differ, sometimes drastically, which means times aren’t always as they appear. Stephen Scullion running the fastest Irish marathon in over 30 years appears perfectly exclusive of both.

Because neither the conditions nor the course at Sunday’s London marathon were even close to ideal for fast marathon running, the relentless rain and looped circuit around St James’s Park an extra drag on body and mind, the end results providing ample evidence of that.

So when Scullion crossed the finish in 2:09:49, over two minutes faster than his previous best, and 11th best in a strictly elite field of the world’s finest marathon runners, there was no denying the significance of his time - only perhaps some gentle debate around the positioning of it.

Indeed that say all records are there to be broken, and London provided ample evidence of that too - Eliud Kipchoge from Kenya losing the run of his seemingly unbeatable marathon record, while Scullion ran firmly into the realm of the Irish record.

That relentless rain and cool conditions may have slowed things slightly at the very front of the race - Ethiopia’s Shura Kitata winning the final sprint for the line in 2:05:41, Kipchoge by then dropped and distanced back in eighth - but not far behind Scullion was running the race of his 31 years, his 2:09:49 notable on two distinct fronts.

Only John Treacy has ever run faster than that, also the only other Irish runner to have previously gone sub-2:10 over the classic distance: Treacy’s Irish marathon record is still considered the 2:09:15 he ran when finishing third in Boston back in 1988, although for world record purposes Boston is considered a slightly downhill course, and therefore not deemed eligible for record purposes according to World Athletics.

It will certainly stand as a Northern Ireland record, rubberstamping his Irish selection for the Tokyo Olympics next summer and, for now at least, it stands as the fastest Irish marathon time run on a strictly record-eligible course.

It certainly wasn’t the usual London course with the small, strictly elite fields starting where it normally would finish, and instead of being one big lap it was just under 20 small ones. However, it proved no less compelling, the mass participation element taking place in the virtual sense only due to Covid-19, the race also postponed from its original April date.

Scullion, the reigning Irish marathon champion from Dublin last October, certainly went to London in form, the 31-year-old from Belfast improving his half marathon best to 61:08 in Larne just last month, and ran his typically astute race, judging his pace and effort to perfection.

“About to slug about eight pints of Guinness, if I retire about 4am give me a break,” Scullion later joked on Twitter, a reference to a post back in July wher,e struggling for motivation in the aftermath of the lockdown, he briefly announced his retirement only to promptly backtrack.

On the day Scullion was the second best non-African runner, and finished just three places behind Kipchoge, who failed in his bid to win a record fifth London marathon, having run an official world record of 2:01:39 in Berlin in 2018. After sitting comfortably behind the pace-makers for the first 30km, Kipchoge found himself out the proverbial back door in the last 5km. After winning his last 10 straight marathons as well as running the first unofficial sub-two with his 1:59:40 in Vienna this time last year, it was a first marathon defeat since Berlin in 2013 - his time on Sunday a modest, by his standard, 2:06:49.

Kipchoge later revealed that a blocked right ear had bothered him over the last 15km, and that he had also suffered with a cramp: “There will be more marathons,” he said. “Sport is unpredictable, but you know what they say: If you want to enjoy sport then you accept the results. So I accept the result and congratulate all finishers.”

The other Irish men’s entry Mick Clohisey, who has a best of 2:13:19, didn’t fare as well on the day and finished 26th in 2:18:52. The women’s race went to Kenya’s world record holder Brigid Kosgei, who defended her title in 2:18:58, the American Sara Hall overtaking world champion Ruth Chepngetich in a thrilling sprint finish to take second place, while Irish born Sinead Diver ran 2:27:07 to finish in eighth place, a third top-eight finish in a marathon in the last two years for the 43-year-old now representing Australia.