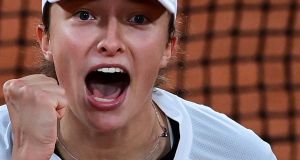 Simona Halep stepped on to Court Philippe Chatrier at the start of day eight at Roland Garros as the logical favourite to drive on to her second French Open title, riding a career-best 17-match winning streak and playing outstanding tennis.

A little over an hour later she was out of the tournament in the fourth round, and the remarkable Polish teenager Iga Swiatek was celebrating a 6-1, 6-2 victory that not only swept her into the quarter-finals of a slam for the first time but elevated her to the top of the chasing pack in pursuit of the Coupe Suzanne Lenglen.

It was a breathtaking performance. In a tournament that has already thrown up a string of surprises in both singles draws, it was the most remarkable. Many observers predicted a high-grade contest but not even Swiatek’s inner circle, probably, expected her to so completely dismantle the solid clay-court game of the top seed and world No 2, a champion here two years ago and at Wimbledon last summer.

Swiatek, the youngest player left in the women’s draw at 19, oozes composure and self-belief beyond her years and a world No 56 ranking. In a composed courtside interview, she said: “I thought I was playing perfectly. I was so focused for the whole match even I was so surprised that I could do that.”

Talking about her 45-minute blowout against Halep at the same stage last year, she said: “I wasn’t experienced at all then. That was my first match in a big stadium, so I was pretty stressed. Since then I’ve made huge progress, because I’ve played a few big matches against Naomi Osaka and now Simona. It helped me a lot and right now I feel like I can handle the pressure.

“But also I remember I lost to Simona here [6-1, 6-0]and she lost against Amanda [Asinimova]next round, so I thought maybe there would be the same scenario except kind of change the names around.”

And so it transpired. Swiatek’s challenge now is to husband her bubbling enthusiasm and form in the second week, after giving up just 13 games in four matches, and hold her nerve when the big prize gets closer. She next plays the Italian Martina Trevisan, who upset the fifth seed, Kiki Bertens, 6-4, 6-4. That good result was almost pedestrian by comparison.

Roland Garros, though, is as much Swiatek’s comfort zone as it is Halep’s. “This is my favourite tournament,” the winner said. “When I was a junior, at 15, I played against older players and made it to the quarters, so this week is my dream come true for me – and I hope it’s going to be longer.”

Halep was nonplussed as all her previous good work in the tournament unravelled before her eyes. Indeed, she did not see some of it, so hard did her young opponent strike the ball. Swiatek’s quickest backhand was crossing the net at 76mph – as fast as the hardest-hitting player left in the men’s draw, Dominic Thiem. Her 79mph forehand was just two miles an hour slower than the fastest male, Jannik Sinner. That is Serena Williams-level power.

Swiatek belted winner after winner in a lightning start. In little over half an hour, the Polish teenager was a set and two-love up – an irresistible performance at any level, but stunning against a two-time slam champion who loves clay. Halep practised on nothing else for five months during the lockdown, and skipped the US Open to prepare for Paris.

Swiatek’s father, Tomasz, an Olympic rower who made her practise her tennis shots while balancing in the water on a board, will have been thrilled with her coordination and precision. It was not until the eight-minute third game of the second set that Halep scrambled back into the fight, saving four break points.

It only got tougher for Halep as Swiatek broke her at the sixth attempt for 4-1. Time was running out for Halep faster than her opponent’s spring-loaded legs at the other end. The end was both merciless and merciful as she served out to 15, the final dagger a big serve down the T that Halep could only send dribbling towards the net. – Guardian

1 Ireland, France or England? Who needs what to win the 2020 Six Nations
2 ‘This is not a personality contest’ - Jack Nicklaus endorses Donald Trump
3 America at Large: Golfers guilty of legitimising Trump’s toxic regime
4 Solskjær’s stock is on the rise again after clever squad rotation
5 Football 2020: It’s a knockout revisited – ‘You played, you lost, you went home’
Real news has value SUBSCRIBE