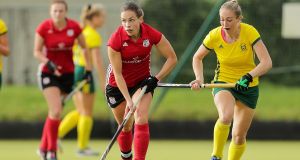 Cliodhna Sargent (left) in action for Cork Harlequins against Sarah Hawkshaw of Railway Union during an EY Women’s Hockey League match at Park Avenue in Sandymount in 2018. Photograph: Laszlo Geczo/Inpho

Irish international and Cork Harlequins player Dr Cliodhna Sargent has doubled down on her criticism of the sport’s governing body, Hockey Ireland (HI), saying they are ‘tone deaf’ to real health concerns regarding Covid-19.

HI recently issued a set of sanctions that they said would be enforced if teams did not fulfil fixtures. Four Irish Hockey League (IHL) teams declined to travel last weekend including Harlequins and Pembroke, who had a positive Covid-19 result.

Published rules say a team refusing to fulfil a fixture played under Return to Play protocols citing Covid-19 concerns will be considered to have forfeited the fixture. The match will be recorded as a 5-0 loss for the defaulting team and the match awarded to the opposing team. The defaulting team will also forfeit home advantage in their next scheduled home fixture between the clubs.

“Dublin being on a Level 3, it can’t be a one size fits all solution because all teams are different in what they are going through and what the players are going through,” said Sargent, who has been capped over 200 times for her country.

“I thought it was very tone deaf in terms of how you deal with players and the whole situation at the moment. It’s putting so much stress on so many people. For them to put out that and . . . .basically force teams into having to travel even if the players or their parents are not comfortable.

“It is forcing a team’s hand to either lose points and deal with that, or travel and try to deal with the stress of that and maybe feel they are taking a risk or not adhering completely to the duty of care for their players.”

Where both teams refuse to fulfil a fixture Hockey Ireland say that a 5-0 loss will be recorded against both teams and that both teams will also forfeit home advantage for a future match, adding that a club cannot gain an advantage from forfeiting a match. Disqualification is also listed as a sanctioning option.

The difference of opinion has very much become the first Covid-19 related public dispute between elite players and a governing body with the players framing it as a health issue in which they should have a strong voice. Irish players who will travel to the Tokyo Olympics next year are involved in many of the IHL matches.

“We ended up, senior players and coaches, having quite a few meetings and with the entire squad we’ve had two meetings that included parents prior to making a decision [not to travel] last week,” said Sargent, who is also a mother.

“The majority of people in the group said they were not comfortable. To stand around in a group and as a whole feel that it is not safe for you to travel into an area but your hand is being forced by your national governing body . . . that’s really not great. It took us two weeks of meetings to finally make a decision. That’s two weeks of stress.

“Hockey is supposed to be enjoyable. It is something that gets the community together, gets it working together and instead you feel like being put under risk and it becomes not enjoyable whatsoever. I thought it was very unfair the way that Irish hockey is dealing with it. It seems that they went away and tried to decide what the strictest measures were they could possibly put in place to stop people from coming forward with their concerns and force them to travel.”

In an email HI said that clubs should make submissions about failure to fulfil fixtures and a working group would decide what sanctions would or would not apply.

“Hockey Ireland has endeavoured to bring competitive hockey back to its community in as safe a manner as possible, with all guidelines from Sport Ireland and the Government being followed. Rules were sent to Clubs regarding the issue of non-travel for matches and automatic forfeiture. However, where a game is not being played due to travel concerns around Covid-19, the Club in question must make a submission to the EY Working Group and a decision will be made on the outcome by this group.

“Hockey Ireland respects the decision of Clubs not to travel where they are uncomfortable in doing so. However, in the process of accommodating a 2020/21 league being completed in as close to the usual timeframe as possible, careful management of this issue is required.”