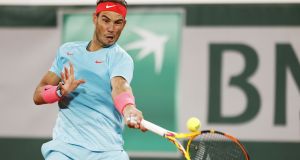 Rafael Nadal easily dispatched Stefano Travaglia in the third round of the French Open at Roland Garros in Paris. Photograph: Ian Langsdon/EPA

Claycourt master Rafael Nadal powered his way into the fourth round of the French Open with a merciless 6-1, 6-4, 6-0 demolition of Italian Stefano Travaglia on Friday.

The second seed, looking to extend his record to 13 titles at Roland Garros and hoping to match Roger Federer’s record of 20 men’s Grand Slam singles titles, will next meet American Sebastian Korda.

“The scoreline is because I did a lot of good things, I went to the net more often, I was more aggressive,” the 34-year-old said.

“I played my best match here at Roland Garros this year.”

After 23 minutes, the first set was already in his bag. Travaglia had only managed six points, being completely overwhelmed by the Spaniard’s power.

Travaglia played deeper early in the second set and Nadal found himself with a little challenge.

He broke for 4-3 but in the following game faced his first break point, which he saved to extend his lead to 5-3, then holding to love to move two sets up.

Travaglia’s resistance cost him dearly as he collapsed in the third set, managing only eight points.

Wildcard Hugo Gaston took down former French Open champion Stan Wawrinka 2-6, 6-3, 6-3, 4-6, 6-0 in a riveting contest. Gaston is the last French man standing out of the 18 that started in the main draw at this year’s tournament. The Swiss, whose only loss to a Frenchman in 10 previous matches at Roland Garros was against Jo-Wilfried Tsonga in 2012, ran out of steam as the 20-year-old, ranked 239th, romped to victory in front of the vociferous Court Suzanne Lenglen fans. “I tried to play my game, I entered the court to win even if I didn’t think I could win,” Gaston said in his court-side interview. Gaston, who broke Wawrinka eight times, will next face Austrian third seed and US Open champion Dominic Thiem, the runner-up at Roland Garros in the last two years.

Thiem rated his third-round victory over Casper Ruud as one of his best performances of the season.

The US Open champion has yet to drop a set at Roland Garros and recovered from a slow start to beat Norwegian Ruud 6-4, 6-3, 6-1.

Revenge was super sweet for Simona Halep as she swept aside Amanda Anisimova to reach the fourth round of the women’s singles. American teenager Anisimova ended Halep’s title defence in the quarter-finals at Roland Garros last year but managed just one game in a 6-0, 6-1 defeat that lasted only 54 minutes. Halep, the top seed and title favourite, has now won 17 matches in a row dating back to the Australian Open.

Third seed Elina Svitolina battled her way through to the last 16 with a 6-4, 7-5 victory over Ekaterina Alexandrova.