Thomas Barr over the hurdles into semi-finals in London

Waterford native progresses in the 400m hurdles at the World Championships 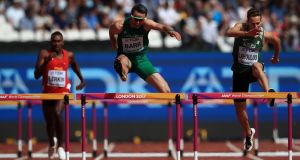 Never forget in a flat-out of race 400 metres, which includes 10 three-foot high hurdles and executed on a virtual tightrope, anything can and often does happen, and that is one of the reasons why Thomas Barr is now safely into the semi-finals at these World Athletics Championships.

Because Barr initially finished fifth in his heat this morning, messing up his stride pattern and clocking 49.79 seconds, which would have meant waiting to see was that enough to progress as a faster loser (and it was, anyway).

Only minutes after the finish it was announced race winner Kyron McMaster from the Virgin Islands, the fastest man in the world this year with his 47.80 seconds, had been disqualified for a hurdle infringement, fatally messing up his stride pattern.

Barr was watching the re-run of the race in the mixed zone while recounting his own mistake, and promptly realised it was nothing compared to McMaster. So the Waterford athlete goes straight through to those semi-finals (8.20 on Monday night) primed it seems to make some amends.

“That’s not how I wanted to get through, I wanted top two. I wanted 49-low, to get a good lane for tomorrow. If the job is done great, but I messed up a little on the top bend, messed up my stride pattern on the homestretch, was finishing on my right leg instead of my left, so didn’t have the usual drive.

“I was relaxed, focused on my own race, doing what I needed to do. It was just that top bend, my stride pattern, I had to reach into hurdle five, and because of that was a little far down on hurdle six, changed down, and never got my optimum stride patter coming home. Maybe a little complacency, I’m not sure.

“But I live for championships, and that’s why I gave up so many races on the circuit this year. I just wanted to get out here, to London, where everything is in the time boat. Times don’t matter, and it’s about dealing with the pressure.”

It is likely a 48-second clocking will be needed to make the final, but don’t forget either Barr improved his best to 47.97 when finishing fourth in the Rio Olympics last summer.

McMaster completely misjudged his stride pattern down the backstretch, and essentially half-cleared the fifth hurdle, clearly dragging one leg to the side of it, and also over the track line, which resulted in automatic qualification.

Barr then had good reason to be relieved: “At least I’ve given myself another bite of the cherry, but in slightly more dull tone.I’ve felt really good the last few days, training has been great, so I pumped, ready to go, it just fell about a little. The semi-final is always a new race. It’s two from each, and two, to make the final, and I just have to put myself in that place. I can’t mess about.

“I know if I tidy up a few technical things, there’s a 49.2 there. I always feel this way after the first heat, and hopefully tomorrow there will be more in the legs.”

Asked about Justin Gatlin’s win over Usain Bolt on last night, Barr also said: “It was a shock, obviously. And the fact Gatlin has had two doping bans he shouldn’t be in the sport. But at the same time there are other people out there who have cheated, and probably are cheating, and they’re not getting booed.

“I think people just want that villain, the Batman and the Joker, and maybe in some ways the sport needs it. I don’t feel for him for what he’s done, but felt for him for that (the booing).”