Ceremony moved from 8pm to 6.50pm before the evening programme begins 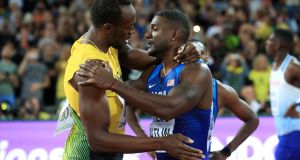 Usain Bolt and Justin Gatlin after the 100 metres final at the World Championships. Photograph: PA

Sunday night’s world championships 100m medal ceremony has been switched because athletics’ chiefs do not want to see a full stadium booing Justin Gatlin and the American national anthem.

The ceremony was originally due to be held at 8pm but has now been moved to 6.50pm before the evening programme starts. The International Association of Athletics Federations has officially insisted that the switch has “nothing to do with the result”, however their denials were met with scepticism by most observers inside the London Stadium.

Meanwhile Sebastian Coe, the president of the IAAF, says he will congratulate the new world 100m champion Justin Gatlin if he sees him in London this week – but admits he was far from “eulogistic” to see the twice-banned American sprinter win gold. In what was Bolt’s final individual race before retirement, the 11-time world champion could only take third place, behind United States sprinters Gatlin and Christian Coleman.

“Sport rarely settles upon the perfect script. Life’s just not like that,” Coe said. Speaking on BBC 5 Live’s Sportsweek, Coe added: “It’s not the worst result ever. “I’m hardly going to sit here and tell you I’m eulogistic that somebody that has served two bans in our sport would walk off with one of our glittering prizes, but he is eligible to be here.”

Coe said that as head of the IAAF he would have to congratulate Gatlin if their paths crossed in London. “I will say, ’You were eligible to compete here and frankly’ - as Usain Bolt said to him last night - ’you have worked hard for what you have achieved’,” Coe said. “I think the journey to that point is not a comfortable one for me.”

Coe stressed the IAAF tried to effectively end Gatlin’s career following his second failed drugs test in 2006, only for court action to see his suspension reduced. “There have been two bans in the past, one which got watered down which made it very difficult for the second ban,” Coe said. “The second ban we went for an eight-year ban which would have in essence been a life ban - we lost that. So these things are suffused in legality.”

Coe said he was “never going to close the door” on the prospect of life bans for drug offenders, saying “the majority” in athletics would favour them being available as a punishment. “We have tried it, we’ve constantly tried it,” he said. “We’ve lost it in a mixture of courts and particularly the Court of Arbitration (for Sport).”

Meanwhile the Jamaican prime minister Andrew Holness has called for athletes who fail drug tests to receive life bans following Gatlin’s victory. “I think there should be very stringent penalties for people who use performance-enhancing drugs in sport,” he said. “It’s the only way you’re going to fully ensure that people don’t cheat in the sport.

“What I’m particularly proud of is he did the work, he stuck with the sport, he worked very hard, he followed the advice of his coach, but more than that, he kept clean.

“I think that adds so much to the value of what he has managed to achieve, being a sportsman who has managed to achieve all these things without even the slightest suggestion of any performance-enhancing,” the Jamaican PM added. “That is the value of his contribution, that he can do all these great things, all these superhuman things, without any performance enhancement, no suggestion of cheating, I think that has capped his career.”

Meanwhile Bolt took umbrage when a journalist pointed out that this was the slowest 100m winning time since 2003 – before adding: “the marks in general were much slower than the last edition of the world championships, and I’d like to know from you guys if you think there is any kind of relationship from a stronger anti-doping control.” Bolt interjected, “Woah what? What’s she saying?” The journalist then explained there were 21 sub-10 second times at the Beijing worlds championships and less than 10 here. As she was explaining herself, Bolt signalled to the other two medallists that he wanted to answer the question.

“First of all I’m sure everyone up here takes that as very disrespectful,” he replied. “You know what I mean. I, we’ve worked hard. Justin has done his time throughout the years and he’s proven himself over and over again. I’ve proven myself over and over again. The young kid just coming in, Coleman, has done great. He’s performed himself to show the world to show he’s going to be a great athlete.

“There’s something called injury and sometimes everything don’t go as smoothly as you want to, there’s negative wind. There’s so much different things, so for you to just directly say something or state something to all three of us like that I take that disrespectfully, you know what I mean?”

Gatlin then replied: “As athletes regardless of what the sport is we’re human being still. We have to perform. We work hard. We train everyday as you all are sitting typing on your computers. Of course sometimes our times are not going to be the best. So I don’t think it’s an algorithm to an anti-doping issue.”