Nadal and Dimitrov advance on day of shocks in Australian Open

American contenders Venus Williams, Stephens and Vandeweghe all bow out 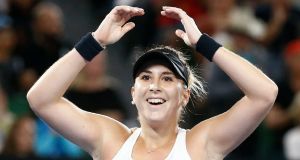 Top-seed Rafa Nadal and world number three Grigor Dimitrov progressed to the second round of the Australian Open with easy victories on Monday while top American contenders were sent packing after shock defeats in the first round.

World number one Nadal cruised to a 6-1 6-1 6-1 win over Dominican Republic’s Victor Estrella Burgos while Dimitrov beat Austrian Dennis Novak 6-3 6-2 6-1 to set up second round clashes against Leonardo Mayer and Mackenzie McDonald respectively.

Ryan Harrison and McDonald were the only Americans to progress to the second round of the men’s draw with seeded Jack Sock and John Isner crashing out along with surprise early exits from Croatian Borna Coric and South Africa’s Kevin Anderson.

Of the many rolling shocks that rippled through day one at Melbourne Park, on and off the court, the near-total wipeout of the American women – including the fifth seed Venus Williams, the reigning US Open champion Sloane Stephens, and the Flushing Meadows semi-finalist Coco Vandeweghe – was the most brutally stark.

Only last September, Americans filled all four semi-final slots at their own end-of-year Slam, so the crash on Monday was loud and painful. Of the 10 who set out on the first day of the first major of the season (from a total contingent of 17), only Nicole Gibbs finished on her feet, a 6-1, 6-1 winner against a lucky loser, the Bulgarian Viktoriya Tomova.

Williams, the beaten finalist last year when playing her sister Serena, and the oldest player in the draw this time at 37, said after the unseeded Belinda Bencic beat her 6-3, 7-5: “I don’t think I played a bad match. She just played above and beyond. I just have to give her credit for that.”

It was a low-key response that sidestepped her 28 unforced errors, to just 12 by her Swiss opponent.

Bencic looks in shape to return to the world top 10 after recovering from wrist surgery and she is playing way above her No78 ranking.

“She beat me four times before, so I was really happy I took my chance this time,” she said. “It was a very, very long time when I was out [injured]. I couldn’t wait to come back. It means a lot.’’

Bencic seemed unfazed by an early stoppage for rain, which interrupted her fightback, serving at 4-3 after she had saved five break points. When they returned under the roof on Rod Laver Arena, she hit a rhythm instantly, and won six points in a row to take the first set.

They traded breaks early in the second set before Bencic prevailed again in the 12th game. Some free hitting at the end got her over the line in just under two hours. The short story of the match was that Bencic took her chances, and Williams was unable to. The Swiss, who had not previously troubled the American, turned five of 12 break chances to her advantage, while Williams could convert only two from eight.

The veteran champion went into monosyllabic mode afterwards, unable to say when or where she will play next. And, when asked to comment on a recent Vogue article in which Serena outlined her serious medical difficulties giving birth last year, she would only say, “Serena is definitely a tough individual”.

Stephens looked good for a win early on before Shuai Zhang gritted her teeth for an ultimately convincing 2-6, 7-6 (2), 6-2 victory. “There was really nothing I could do,” Stephens said. “I tried my best.”

The other American casualties suffered variously. Sofie Kenin, the Russian-born teenager who now calls Florida home, found the 12th seed Julia Goerges too strong, the German winning 6-4, 6-4. Jennifer Brady, 65 in the world, took the first set against Magda Linette, before the Pole struck back to win 2-6, 6-4, 6-3.

The promising but inconsistent Taylor Townsend never recovered from a slow start against the 19th seed Magdalena Rybarikova, the Slovakian wrapping it up 6-0, 7-5.

The Americans will not have many worse days, but could console themselves with the fact that their brilliant 2017 surely was no fluke. And, as Venus would acknowledge, there is always Serena.