Leap of fate sees Vikings plunder victory from out of nowhere 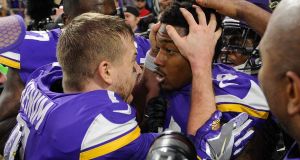 About a half-hour after securing the most improbable victory of the NFL playoffs with the most improbable pass of his improbable season, Case Keenum sat facing his stall in the Minnesota Vikings lockerroom. Still wearing his uniform, eye-black smeared on his face, Keenum dropped his head to his hands.

He lifted it, then dropped it again, went to stand, then sat back down, as if he needed another second, or three, to continue processing it: Vikings 29, New Orleans Saints 24, a mind-bending affair that immediately joined Games 6 and 7 of the 1991 World Series among the most famous and emotionally draining in Minnesota lore.

The Twins won both in extra innings, scampering onto the field in celebration. On Sunday, at the site of the old Metrodome, which had hosted more playoff despair than euphoria, the Vikings, in effect, performed the football equivalent.

They won a game as time expired, on a play called Seven Heaven, on a deep corner route that Stefon Diggs runs all the time in practice but, according to receiver Jarius Wright, one in which he has never actually caught the ball – let alone turn a 35-yard heave toward a thicket of players into a 61-yard touchdown, nearly losing his balance before dashing untouched into the end zone.

“This is the first time ever I’m out of words,” defensive end Everson Griffen said. And though such statements, made in such moments, usually reek of hyperbole, they often contain a kernel of truth. He stammered as questions kept coming his way, and he ultimately composed himself enough to say that he intended to watch Remember the Titans when he got home, to preserve the high.

“This is unbelievable,” Griffen said. “About time. About time.”

Only some of these Vikings played on the 2015 team that lost to the Seattle Seahawks when Blair Walsh hooked a short field goal, but many have heard about the other inglorious moments in Minnesota playoff history: the miss by Gary Anderson in the 1999 NFC championship game; the overtime kick by Garrett Hartley that escorted New Orleans into the 2010 Super Bowl; Darrin Nelson’s drop in the 1987 NFC title game; and Drew Pearson’s Hail Mary push-off in 1975.

Their forebears may never have won a Super Bowl in four tries, but the Vikings are adamant that the curse does not extend to them. What transpired on a snowy afternoon here may be their best evidence: After they blew a 17-point lead but recovered, after 12 points were scored in the final 89 seconds of a matchup between New Orleans’ second-ranked offense and Minnesota’s top-ranked defence, the scoreboard showed the Vikings had more.

“Craziest ending I’ve ever been a part of out of my 25 years,” running back Jerick McKinnon said in the lockerroom afterward.

“Stefon, my first kid is going to be named Stefon,” McKinnon said.

“Mine is going to be Diggs based off of today,” Murray said.

Keenum, playing for his third team in four seasons, matched Drew Brees, one of the best quarterbacks in league history, and preserved Minnesota’s bid to become the first team to play a Super Bowl in its home stadium. The NFC championship in Philadelphia next weekend will feature two reserves elevated by injury, a match-up of Nick Foles and Keenum, team-mates on that paragon of mediocrity known as the 2015 St Louis Rams. In a league where the quality of quarterback so often defines the quality of a team, the conference finalists reinforce the value of having a complete roster.

Minnesota’s defence is loaded with stars at every position, but its offense, Diggs noted, is populated by cast-offs and misfits and low draft picks. Keenum went undrafted, as did receiver Adam Thielen. They stood on the sideline and watched Wil Lutz drill a go-ahead 43-yard field goal with 25 seconds left, which incited a few Saints personnel to head into in the press box to exclaim that they were headed to the NFC championship. Some fans departed, numbed, perhaps, by the anguish.

Keenum had been waiting his entire peripatetic career for a moment like the one that came next. He had those 25 seconds to guide the Vikings roughly 50 yards – into the desired field-goal range of kicker Kai Forbath, whose 53-yarder with 1 minute 29 seconds left had pushed Minnesota ahead by 23-21. His task, all at once, was to rescue his defence, demonstrate his season was more revelation than fluke and lift his team, and a fan base grated by playoff misery, to victory.

After gaining 19 yards on one completion across the first three plays, to their own 39, the Vikings left the ensuing huddle with Keenum’s words echoing in their ears: “I’m going to give somebody a chance.”

The Vikings practice the play regularly. It is a staple, receiver Wright said, of their Saturday preparation, and they had actually run it a few times earlier in the game. Wright ran an out, as did tight end Kyle Rudolph. The Vikings had no timeouts, and since those routes direct them toward the sideline, where the clock would stop if they stepped out after making a catch, Wright figured he would be the first option.

“That’s why it was amazing,” Wright said. “It was meant for us.”

As Diggs tracked the ball, cornerback Terence Newman, watching on the sideline, knew he would catch it. “Have you seen Stefon jump?” he said. Leaping a few feet, Diggs hovered above Saints safety Marcus Williams, who made the critical gaffe of lowering his shoulder to hit him – but missed, instead striking teammate Ken Crawley.

“I felt the guy brush past me,” Diggs said. “I took a picture before I turned around to catch the ball. There was only one guy there. If he slipped, I’m going to try to stay up.”

Said Williams: “If the play happened different, I would go attack the ball and make a play.”

Team-mates yelled at Diggs to run out of bounds to set up a field-goal attempt, but, after seeing the vast expanse ahead, he just kept running. He sprinted into the end zone. He flung his helmet. Team-mates mobbed him, and he lay there at the bottom of the pile, delirious with joy, gasping for air.

“There were some heavy guys, and I almost passed out,” he said.

The ball squirted free, and he wondered where it went. In the lockerroom, Diggs clutched it. He found Keenum, and they gathered to pose for a photo. Diggs’s mouth was open, his eyes wide, and his hand messed with Keenum’s hair.

As team-mates unpacked what Thielen called “one of the greatest games of football ever played,” Keenum turned around and went back toward his locker, shaking his head once more and not for the last time. – New York Times