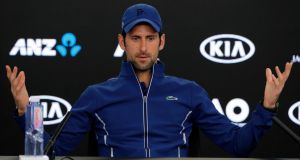 Serbia’s Novak Djokovic is said to have made the demand for a significant rise in prizemoney at a mandated players’ meeting on Friday. Photograph: Vincent Thian/AP

Novak Djokovic, the first player to pass $100 million in prizemoney, sent a shiver through the Australian Open on an overcast day one when it was suggested he is fomenting a players’ pay revolt that could split the game wide open.

The Serb, a six-time winner here who lives in the tax haven of Monte Carlo, is said to have made the demand for a significant rise in prizemoney at a mandated players’ meeting on Friday, ahead of a tournament already preparing to double prizemoney over the next five years to more than 100 million Australian dollars (€65 million).

Tennis Australia officials and representatives of the Association of Tennis Professionals were asked, politely, to leave the room, according to a report in the Daily Mail, and Djokovic introduced a lawyer who outlined the case. There was allegedly talk of forming a breakaway players’ union, separate from the ATP, the body headed by Chris Kermode, who is known to favour reducing the number of players on the Tour.

Neither Kermode, the ATP nor Tennis Australia were prepared to comment on Monday until they had confirmation of the demands from Djokovic himself.

The former world number one, who seeded 14th after a six-month break to heal an elbow injury, is scheduled to open his campaign at Melbourne Park on Tuesday afternoon, against the American Donald Young. He was not available for comment on Monday.

Among players present at Friday’s meeting were Andy Murray, who is convalescing in Melbourne after his hip operation, the defending champion, Roger Federer, who is said to be sceptical about the move, and Rafael Nadal, last year’s beaten finalist. Earlier, the players listened to an outline from Tennis Australia for plans to double prizemoney for the season’s opening major from 55 million Australian dollars (€36 million) to 100 million Australian dollars.

Many leading players regard their remuneration to be out of kilter with other sports, particularly golf. The riches are considerable at the top, but minuscule outside the top 100, and a breakaway would seriously undermine the authority of the ATP, which represents the combined but sometimes conflicting interests of the players and the tournaments.

Djokovic’s surprise intervention follows on the heels of unfortunate remarks by Bernard Tomic, the temperamental Australian who lost his final qualifying match on Sunday and turned on waiting courtside reporters with a sarcastic reference to his own obsession with money.

“I just count money, that’s all I do,” he said brusquely after losing in three sets to the Italian Lorenzo Sonego. “I count my millions. You go do what I did [on court]. Bye bye.”

Former slam champion Andy Roddick said Tomic’s problems looked to be “self-inflicted” and there was a storm of antagonistic responses on social media against the player whose career has been littered with controversial incidents.

Tomic angered a wide cross-section of people inside and outside tennis at Wimbledon last year when he declared he was bored with tennis and looked forward to retirement after earning enough to never have to work again. His compatriot and former Wimbledon champion Pat Cash told the BBC at the time: “He needs to go and work in a factory, and do some labour, and see what it’s like to really work out there. I mean he’s too rich, too early.”

However, away from the higher reaches of the game, lowly ranked players continue to struggle to make a living, often playing in front of small crowds in tournaments on the Challenger and Futures circuits, potential prey for gamblers and match-fixers.