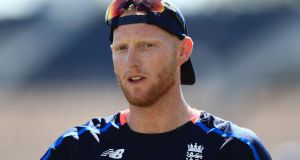 England all-rounder Ben Stokes has been charged with affray after a fight outside a Bristol nightclub. Photograph: John Walton/PA Wire

England all-rounder Ben Stokes has been charged with affray after a fight outside a Bristol nightclub, the Crown Prosecution Service said.

The 26-year-old missed the Ashes series in Australia as a consequence of the incident, with the England and Wales Cricket Board opting to rule him out.

The Crown Prosecution Service said in a statement: “The CPS was passed a file of evidence by Avon & Somerset Police on November 29, 2017 in relation to an incident of disorder in Bristol city centre.

“Further material was subsequently received in late December. Following a review of all the available evidence, the CPS has today authorised the police to charge three men with affray in connection with the incident.”

Avon and Somerset Police added in a statement: “Three men have today been charged in connection with an incident of disorder on Queens Road, Bristol on September 25 last year.

“Having carefully considered the evidence, the CPS has today authorised Ben Stokes, 26, of Durham, Ryan Ali, 28 and Ryan Hale, 26, both of Bristol, to each be charged with one count of affray.

“They will appear at Bristol Magistrates’ Court at a date to be confirmed.”

Stokes was arrested following the incident, which occurred in the early hours September 25 some time after England beat the West Indies in a one-day international in Bristol.

Stokes was suspended by the England and Wales Cricket Board as police conducted inquiries.

He consequently missed the Ashes series in Australia over the winter, although he was given permission to play some club cricket in New Zealand for Canterbury.

He was ruled out of England’s ongoing one-day series in Australia last week but was given permission to play in the next Indian Premier League competition. He was also named in the England squad for the Test series in New Zealand in March but his availability will now be discussed by the board.

An ECB spokesperson said: “ECB is aware that Ben Stokes has been charged with affray in relation to an incident in Bristol in September.

“The Board will now convene within 48 hours to decide on Ben Stokes’ availability to represent England at this stage.

“A further announcement will be made in due course.”