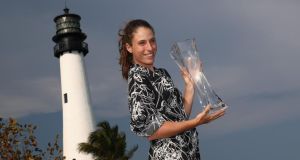 Johanna Konta believes a combination of life experience both on and off the court helped her become the first British woman to win the Miami Open.

The 25-year-old defeated former world number one Caroline Wozniacki 6-4 6-3 on Saturday to move to a career-high seventh in the world rankings, beating her previous best of ninth last autumn.

“I think it was probably a combination of everything, but also a question of maturity,” Konta told wtatennis.com.

“I needed to go through certain life experiences, not just on court, off court as well, to I think make me into the competitor that I am, and also the person off court.

“I think a lot of things go very hand and hand when I it comes to sport. It’s not just a job. It’s your life. It’s your lifestyle. I think you have to grow up in a lot of different areas for it to transfer on court as well.”

Both women were competing in their first Miami Open final, but, while Wozniacki was seeking her first win of the year, Konta had already won the Apia International in Sydney.

“That’s what I’m going to do. I’m going to learn from the things that I can do better, but at the same time not beat myself up too much and just keep working and doing what I’m doing.”

Konta got off to the dream start with a break of Wozniacki’s serve in the first game of the match and then held her own to take a 2-0 lead with an ace.

The Dane, who was contesting her third final of the year after Doha and Dubai, got into her groove with her next service game to hold, but called over her father for a coaching session just 10 minutes into the match during changeover.

Whatever was said seemed to make a difference as the former world number one hit four points in a row to break back and level at 2-2.

The duo had a closer battle in the fifth, but Konta found her way to break Wozniacki’s serve for the second time to edge back ahead before the next two games went with serve.

The Briton still had the upper hand, though, but Wozniacki pushed her repeatedly to advantage on her next service game before claiming a break which levelled the opening set up at 4-4.

Konta hit back quickly though and again broke her opponent before firing in some great serves to clinch the set.

The Sydney-born player, who made it to the quarter-finals of the event last year on her debut, broke in the first game of the second set but 26-year-old Woznizcki immediately broke back before holding to take a 2-1 lead.

The Dane received attention and had her right foot and ankle strapped in a medical time-out, but continued with the match, which went with serve to see Wozniacki 3-2 ahead in the second.

Konta held her next serve before breaking Wozniacki and holding again to lead 5-3, putting her one game away from the title.

The pressure was all on Wozniacki’s service game and Konta moved to championship point with a blistering return before claiming the title after a Hawkeye check on her winning lob.

Konta praised her team after the victory.

“I was very fortunate that throughout the years I’ve managed to have some very, very good people around me,” she said.