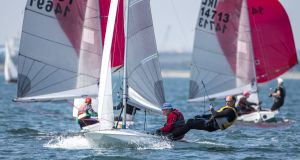 A welcome change of direction by Ireland’s sailing clubs and classes is on the cards in the near future as an end to congested fixtures and overlapping regattas is in sight.

The 2017 season is already beset by problems with three important events all being staged within two weeks of each other in June and all vying for the same participants.

A change at the helm for the Irish Sailing Association (ISA) last weekend sees London 2012 Olympic race officer Jack Roy take over from outgoing David Lovegrove and face straight into the teeth of this significant issue facing the sport.

With a multitude of interest groups and venues comprising both the sport and leisure sides of sailing, the ISA is fast becoming the only viable body to draw the competing elements together cohesively.

But the confusion goes much further than overlapping or clashing fixtures amongst the bigger boats of the cruiser-racing fleets. Dinghy and One-Design classes are also facing congestion and competition for both participants and facilities.

The solution aired extensively last weekend was better co-operation and co-ordination with research earlier this year indicating the sport was starting to turn towards growth once again.

While the results of the annual ISA Satisfaction Survey were broadly welcomed by former president Neil Murphy and there was evidence of a new willingness for co-operation between classes, a sharp decline in the response level over the previous year was puzzling.

However, a strong turnout for the Classes Forum that followed the agm supported the findings that two-thirds of classes would be willing to share events with other classes. At least half the classes have already tried doing so in 2016.

But Irish Sailing is a complex church.

Apart from 64 clubs nationwide plus 106 accredited training centres, some of which are also counted in the clubs there are an additional 42 classes comprising dinghies, one-designs and larger cruiser racing yachts all catering for various tastes of technical complexity, physicality and cost.

So can the ISA work as an honest broker to ensure a better spread of fixtures?

“Whether there’s a role for the ISA to come back in and say ‘we’d like to take some control of the fixtures list’ is something we can look at but whether the clubs/classes will have anything to do with us is another matter,” Roy told The Irish Times.

“It certainly falls at our doorstep now to look, bearing in mind what’s happened to have some influence on national fixtures. Historically, we tried and it didn’t work because the clubs and classes didn’t want to interact – they were too interested in their own agenda.”

The call for more sharing of events and resources was also echoed by Irish Cruiser Racing Association (ICRA) commodore Simon McGibney. He agrees that in addition to the classes, a significant majority of people – clubs and sailors – like the present arrangement and aren’t seeing an attractive alternative to make them change.

“We also have to see the other side of it. All these clubs rely on bigger events for their income so you can understand why the hierarchies in the clubs don’t want to move away from the present.

“There’s a big change and everyone is coming to the realisation that, even though its been a sticking point for years, we’re all feeding from the same pond of boats. With few exceptions, most local boats are only choosing one event to travel to each season.”

“Its not that people want to do too many events, that’s not our problem, it’s just that they can’t. The problem is that between the downturn in the economy, people working extra hours, getting time off work, travel . . . the telltale signs are that this is a global trend.

McGibney points to exceptional efforts such as Crosshaven’s Paul Tingle and Waterford’s Rob McConnell campaigning hard and planning to race in the ICRA National Championships and the O’Leary Life Sovereigns Cup in June before heading up the East Coast for Volvo Dun Laoghaire Week.

“I can see light at the end of the tunnel, from the dinghy classes right up to the cruiser racing classes that everybody is waking up to the idea that people just do not have the time to do a clustered event calendar ,” he said.

Yet in spite of challenges facing some regattas, McGibney doesn’t see a threat to staples such as Volvo Dun Laoghaire Regatta or Calves Week as the numbers are big enough to sustain these events.

“Where the problem lies is the management and the co-ordination of everyone working together because we’re all feeding from the same pot,” he said.

The issue of whose role is it to pull everyone together has yet to be resolved.