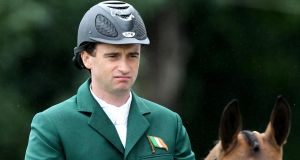 Ireland’s Denis Lynch is in to the World Cup jumping final at Nebraska on Sunday. Photograph: Lorraine O’Sullivan/Inpho

Ireland’s Denis Lynch has qualified for Sunday’s Longines World Cup jumping final at Omaha, Nebraska having completed a testing second round of jumping on Friday night with just a single time fault.

Lynch and Thomas Straumann’s 14-year-old stallion All Star were in 21st place after Thursday’s opening salvo but, having finished 10th on Friday, have now up moved up to 13th place overall on the leaderboard with 15 penalties in total. They were one of just 10 combinations not to touch a pole over a tough second round course set by Ireland’s Alan Wade but also one of seven to finish with time faults.

The jump-off class saw a second win for the USA’s MacLain Ward riding HH Azur whose second round clear was recorded in 36.87. Belgium’s Gregory Wathelet filled the runner-up slot with Forlap (39.39) while Romain Duguet of Switzerland finished third on Twentytwo des Biches (40.46). McLain goes into Sunday on a score of zero while Switzerland’s Steve Guerdat, who is seeking a hat trick of victories in this World Cup series, is on eight.

Reflecting on his two World Cup rounds so far in Omaha, Lynch said: “We didn’t start off great on Thursday, we had a silly fence; he (All Star) kicked back over an oxer. I’ll take it on my cap, I was a bit slow around to that oxer. Today we were much better, okay we have a time fault but a few others have too. I’m very pleased with him.”

In Europe, Wexford-born Bertram Allen won the 1.45m jump-off class in Kronenberg, The Netherlands with the Holstein nine-year-old GK Casper while Kilkenny’s Anna Carway landed the 1.40m speed class at Cagnes-Sur-Mer in France with the 12-year-old Dutch Warmblood gelding Ajaccio.