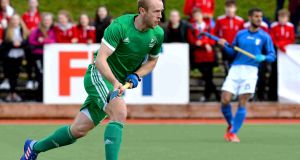 Eugene McGee: his massive experience will prove an asset to Banbridge in the Irish Senior Cup final on Sunday. Photograph: Rowland White/Presseye/Inpho

There will be more than the usual trepidation in Monkstown as they seek their third Irish Senior Cup trophy in five years on Sunday.

Monkstown were winners of the trophy in 2013 and last year. But defeat, following a shoot-out, to Glenanne in the recent Leinster Senior Cup final at Grange Road will have hardened their resolve to come up with a better performance this weekend.

In opponents Banbridge the Dublin-based side face a team that supplied four players to the Craig Fulton-led Irish squad who recently secured their place in the final World Cup qualifying event by winning the preliminary tournament staged in Stormont.

Among the quartet was Player of the Tournament Johnny McKee and veteran international Eugene Magee, who brings almost 250 caps into the arena. Monkstown’s Lee Cole was the club’s sole representative for this event.

This weekend Monkstown welcome back their goalkeeper Davy Fitzgerald, while Rio Olympian Kyle Good will want to make an impression this time out, with Monkstown wondering how they allowed the Leinster final come down to a penalty shoot-out in the first place.

But they are without Gareth Watkins and Richard Sykes in their effort to hold on to the oldest trophy in the game.

Banbridge sit second in the EY Irish Hockey League table, a point behind Three Rock Rovers but with a game in hand. They have also flourished at European level and although Monkstown have been cup specialists over the past few years, the Ulster side may be slight favourites.

The sides drew 3-3 in Banbridge’s Havelock Park in the Irish league but Monkstown were put to the sword 5-1 in their home game against the Bann’ in the Merrion Fleet Arena in Rathdown School.

Banbridge have a strong defence which obviously Monkstown know how to unlock as they bagged three goals in one match. But they also know the Ulster firepower is dangerous as, in the 5-1 defeat in Dublin, Banbridge pounced on every mistake made by the home side and punished them harshly for it.

Banbridge have conceded just 17 goals in 14 matches, the best record of any team in the Irish league, whereas Monkstown have given up 30 goals for the same amount of games. Monkstown have scored 48 goals over that spell, just one more than their opponents on Sunday.

Banbridge may be favourites but if Monkstown can stay tight and disciplined they will have a decent chance of successfully defending their title.