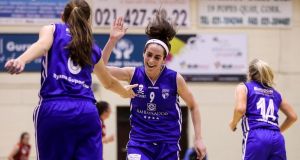 All roads lead to Letterkenny this weekend as the National League finals take centre stage in LYIT, Donegal, from 12pm on Saturday.

Eight games will be played over the weekend, with the men’s League Cup, Champions Trophy, women’s Division One playoff final and women’s Super League playoff final up for decision.

Indeed, in the men’s, a new champions trophy winner will be crowned this year for the first time since the competition’s inauguration.

UCC Demons – who have won the title every year since 2013 – finished sixth in the Super League this year and as a result, will not have the opportunity to defend their title, with four other semi-finalists hoping to do the honours instead for the first time.

Templeogue will be hoping that they can do enough to overcome Ioannis Liapakis’ charges at UCD, with the university side the first team to beat Templeogue in the league earlier in the year, overcoming them 88-82 at the National Basketball Arena back in January.

Down to the wire

Games between these two sides have always been close, with Templeogue taking the honours back in October, 89-80.

The second semi-final meanwhile is set to be a cracker, as the history between Swords and Tralee promises that this game will go down to the wire.

The sides last met down in Tralee at the start of March, where the Kingdom put a massive dent in Swords’ hopes of a league title when they defeated them by seven points (68-61).

Earlier in the season, the games were just as hard to call, with Swords overcoming Tralee in the league (87-80), before they each won a game apiece in the early rounds of the cup.

Meanwhile, the women’s Super League playoffs are set to come to a thrilling climax as, after two cracking games down in Waterford last weekend.

Regular season champions, Ambassador UCC Glanmire, and season runners-up, Courtyard Liffey Celtics, both came through their semi-finals clashes to line up another massive final battle between the two teams.

Glanmire took the spoils in the Hula Hoops National Cup final in January, winning out 61-48 on that occasion, but Liffey Celtics returned the favour just a few short weeks later, overcoming the league leaders 72-65 and will be hoping that they can be the ones to stop Glanmire’s chase of four play-off titles in a row, and indeed, their third title this season.

The women’s Division One final and the men’s League Cup semi-finals and final will also take place over the weekend, with yet more exciting line-ups in store.

In the women’s final, regular season champions, ITC Basketball, will take on Julian O’Keeffe’s charges from Marble City Hawks in a much-anticipated battle. The two sides last served up a thriller in the league in Carlow back in January, when the game went to double overtime before Carlow eventually managed to hold on to a two-point lead, so there’s no doubt this will be one to watch on Sunday afternoon.

In the men’s League Cup meanwhile, Ulster University Elks and BFG Neptune will go head to head in the first semi-final. These sides last met just two weeks ago in the place classification games, with Elks having a 97-93 point advantage on the day, while two weeks’ previous to that encounter it was Neptune who came out on top down in Cork, 120-72.

The other semi-final pits regular season champions Maree against Keane’s SuperValu Killorglin. These two teams also met in the place classification games in Galway two weeks ago, with Maree running out 79-57 point winners on the day.

Games tip off from 12pm on Saturday, April 1st, in LYIT, Letterkenny, Donegal this weekend. Tickets are available on the door with a weekend pass for €15, a day pass for Saturday €10, a Sunday day pass €10, while under 16s go free.