Mixed results for Ireland as FEI World Cup gets underway 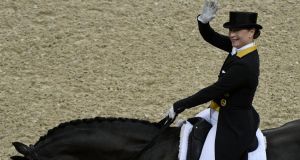 There were mixed results for Ireland’s two competitors as the FEI World Cup finals commenced in Omaha, Nebraska on Thursday.

In the afternoon’s dressage championship at the Century Link Center, Co Kildare’s Judy Reynolds finished fifth in the Grand Prix with Vancouver K, the 15-year-old Jazz gelding owned by her parents, Joe and Kathleen. The Germany-based rider recorded a score of 74.443 per cent, just slightly behind the fourth-placed combination of The Netherlands’ Edward Gal on Glock’s Voice (74.486).

Title favourite, Isabell Werth of Germany, who was last to compete with the mare Weihegold, recorded a comfortable success when topping the marks of all seven judges for a total of 82.300. The host nation’s Laura Graves finished second with Verdades (79.800) while Britain’s Carl Hester slotted into third with Nip Tuck (76.671).

“I’m really happy,” said Reynolds after her test. “Today Vancouver K was very focused and the canter pirouettes were a highlight for me. He was with me all the way and the final passage/piaffe trot sequence down the centre line was a really strong finish to the test.

“I was delighted to receive a score of 76.70 per cent from the president of the ground jury, Katrina Wüst from Germany. A top five finish in the Grand Prix is what I was aiming for as it gives me a great draw for the freestyle final on Saturday. It has been a wonderful experience to come here to Omaha, it is an amazing facility with good surfaces.”

In the night’s first round of the show jumping championship, a 1.60m speed and handiness competition, Co Tipperary’s Denis Lynch had a pole down with Thomas Straumann’s 14-year-old stallion All Star to finish 21st of the 37 starters.

Only 10 clears were recorded over the course designed by Ireland’s Alan Wade with the fastest of these being posted by the USA’s McLain Ward riding HH Azur (59.27). With four rounds of jumping to come, Sweden’s Henrik von Eckermann lies second with Mary Lou (59.58) while, bidding to complete a hat trick, Switzerland’s Steve Guerdat is in third place with Bianca (60.06).

At the Winter Equestrian Festival in Wellington, Florida, Co Offaly’s Darragh Kenny won Thursday’s 12th and final leg of the Ruby et Violette WEF Challenge Cup on a new mount Billy Onslow, an 11-year-old Billy Congo gelding owned by Oakland Ventures. The combination were just second to go in a 19-strong jump-off but set an unbeatable time of 33.33.

“He is such a cool horse,” said Kenny said of the chestnut he purchased from Great Britain’s William Funnell. “I just got him three weeks ago when I was in Europe. He did a 1.40m class yesterday, and then this today. Obviously, I do not really know him so well, but he tries so hard and he is super easy to ride.”

At home, another large entry of 300 combinations has been received for Saturday’s national one-day event at Tyrella, Co Down where the featured three-star class is the second leg of this year’s Connolly’s Red Mills superleague.

With the increasing numbers involved in dressage thanks to the performances of Judy Reynolds, there will be plenty of interest too in Dressage Ireland’s national winter finals taking place on Saturday and Sunday at Cavan Equestrian Centre.

Ireland midfielder Conor Hourihane set for Swansea loan spell 14:25
Richard Keogh has joined Huddersfield until the end of the season 13:25
Jordan Henderson takes up ambassadorial role in support of NHS 13:05
Mason Jones not interested in being the Welsh Conor McGregor 12:01
Charles Byrnes’ licence withdrawn after runner ‘nobbled’ with a sedative 12:52