Ireland aided by absence of Grigor Dimitrov at Davis Cup 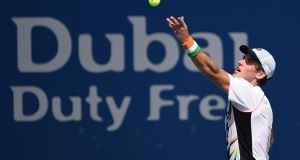 James McGee of Ireland recently made the quarter-finals of the French Challenger. Photograph: Tom Dulat/Getty Images.

The 25-year-old, who won the Queens tournament in London prior to Wimbledon in 2014, where he then made the semi-final, is ranked 13 in the world but won’t be available to play in the 15-team event.

The draw has not yet been made but with Ireland and the host country seeded in the draw, the countries could meet if they emerge from their respective pools.

The tournament is round robin format with three pools of four teams and one pool of three. The winners of each pool play-off against each other to determine which two nations are promoted to Europe/Africa Zone Group II in 2018

“Bulgaria would have Dimitrov but he’s not included. He played a couple of years ago but not since,” says Niland. “Their number one is ranked around 300.

“Moldova have a player ranked 80 (Radu Albot, who made the second round of Wimbledon last year and the first round of this year’s Australian Open. ) but he is not playing and Luxemburg have Gilles Muller (ranked 29) but he’s not playing.

“Of the four seeded countries, Ireland, Moldova, Bulgaria and Luxembourg we have our full strength and the other three teams are missing one player. But Bulgaria have the home advantage and some players ranked 300-400 so they will be tricky to beat.”

Ireland’s goal in the beach resort by the banks of the Black Sea is to gain promotion into Group II, having lost to a Marcos Baghdatis-led Cyprus team last year in the playoff for promotion.

Baghdatis, who last year broke Bjorn Borg’s record with a 34th straight Davis Cup win, has an enviable record in the in singles matches.

“If we can bring the same energy to this week I think our chances are good,” added Niland. “Obviously James (McGee) is involved. We’ve a full-strength team. James has made the quarters in the French Challenger and Dave (O’Hara) is in the final of the doubles so it bodes well for a pretty good week.”

McGee is ranked at 212 in the world with points from the Challenger in France adjusting his position and likely to improve it, when the new rankings come out on Monday.

Ireland fly out on Sunday and play a match Wednesday, Thursday and Friday in the pool phase of the tournament with a fourth match on Saturday for promotion should they get out of the pool.