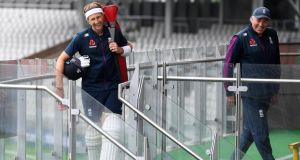 England have dropped batsman Joe Denly for the second Test against West Indies which begins on Thursday at Old Trafford, with captain Joe Root returning to the side.

Root missed the first Test at the Ageas Bowl, Southampton to attend the birth of his child, with Ben Stokes taking the reins in his absence.

Denly, who averages under 30 in Tests, was dismissed for 18 and 29 in England’s four-wicket defeat by West Indies in the opening Test.

Root will slot into his usual number four role, while Zak Crawley, who struck an impressive 76 in the second innings at Southampton, will move up to three.

“It’s never an easy decision, never easy having to leave someone out,” Root told the media on Wednesday.

“With Joe over a period of time he’s done a brilliant job for us, he’s helped show our identity as a side and how we played moving forward. It’s a very difficult decision but we’ve gone a different way.

“You watch Zak’s progression since he’s been involved in the team, his game has continued to get stronger.”

Denly, who made his Test debut against West Indies last year, has reached double figures 24 times in 28 innings but has managed just six half-centuries.

“Joe is someone who has done a fantastic job for us over a period of time and he’ll be as frustrated as anyone that he’s not been able to covert those opportunities,” Root added.

England are set to make a decision on pace bowler Stuart Broad later on. Broad was omitted for the series-opener as England opted for the speed of Jofra Archer and Mark Wood and the experience of James Anderson in their pace attack.

Following their victory in Southampton, West Indies are on the verge of sealing their first Test series win in England in more than three decades.

“There’s no pressure for us,” said West Indies skipper Jason Holder. “We don’t get caught up in the off-field noise. It’s about us focusing on what we need to do to win the series.

“The series is still wide open. There are 10 days of cricket left. England are a very good team, they have some world-class players. We’ve got our work cut out to win another game.”

Thursday’s game is the first of two back-to-back tests at Manchester which will be played behind closed doors in a biosecure environment.

1 Madigan’s primary goal is Ireland caps after switch to Ulster
2 Seán Moran: It won’t take much before cancelling All-Ireland looks like a solution
3 My sporting disappointment: Battered, bloodied, broken by The Wall
4 Heroic insanity: When Michael Dunlop raced home in memory of his father
5 View from Melbourne: Sporting fabric of the city suffering from second lockdown
Real news has value SUBSCRIBE