Irish marathon runner on the many perils of doping in sport 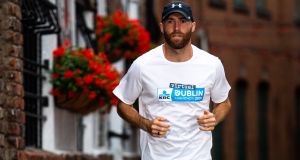 Stephen Scullion at the launch of the KBC Virtual Dublin Marathon, which takes place over the October Bank Holiday weekend. Photograph: Ramsey Cardy/Sportsfile

Every Olympic athlete had their own measures of motivation during the lockdown and for Stephen Scullion these included bottles of wine and takeaway food. There are only so many miles one man can run with no finish line to aim for.

Effectively assured of his place in the Tokyo Olympic marathon, Scullion openly admits he struggled with the lack of races, virtual or otherwise. At least now there’s something in sight, including a virtual Dublin Marathon this October, where last year the Belfast runner recorded another breakthrough time of 2:12:01, second overall, the then fastest time by any Irish man in 17 years.

At times that motivation was tested in other ways too. Scullion turns 32 in November, his best of 2:11.52 from the Houston Marathon last January earning his likely ticket to Tokyo, before earlier this month former marathon world record holder Wilson Kipsang, who once ran 2:03.23, became the latest in a long chain of Kenyan runners to be handed a doping ban. When Scullion finished second in Dublin, he was beaten on the day by Morocco’s Othmane El Gourmi, recently returned from a doping ban.

“I’ve always taken the stance that I can only control what I’m doing,” he says. “That doesn’t mean it’s not hurtful, and do I believe that winning gold medals and world titles are possible in this sport right now? Maybe you’re not a dreamer like that, because you consistently see doping ban here, doping ban there.

“And there’s always been these great stories built around why these Africans are absolutely fantastic, born at altitude, and I think it would be really sad for the sport if we found out it was actually a lie, there was just cheating involved.”

Scullion also recalls his own experience of returning to club rugby in Belfast: “This was at club rugby level, and there were definitely guys involved in muscle-building steroids, whether it was for rugby, or to look good, and I remember how much that annoyed me thinking that someone of the opposing team could run at me, and because they’re taking drugs, could physically hurt me, do damage. It felt like that should even be a jailing offence.

“When you bring it to athletics, and you see these really incredible performances, the danger is you push yourself beyond the natural limit, risk injury, illness. If it’s cheating, it’s not real, and a lot of athletes will do long-term serious damage chasing those results that might not have been even real.”

Now, the return of races has fully restored his motivation: “I’ve always been driven by the big races, since I made my comeback four years ago. Without the big goals, that’s where my running slipped a bit. Instead of doing 15 miles on the road, I might have done six miles on the treadmill, just to get by. And that’s something I battled a lot with, over these last few weeks, trying to find new ways to be motivated.

“When they first postponed Tokyo, I thought I handled it really well. But I think I joked once if I was a fly on the wall, and saw myself with bottles of wine and takeaway food, I’d probably think I didn’t handle it that well.

“So it’s been peaks and valleys, some good weeks, some bad weeks. When the Boston Marathon got cancelled I ran four hours over the Mourne Mountains, climbing 7,000ft, and it was the hardest thing I’ve ever done. For about a week my body was not happy. But it was calculated training, I didn’t see any need to get injured during a time like this. For me, no races equals not as high motivation, not as high professionalism. Now with virtual races coming back, other races in the next few weeks too, it’s time to get going.”

Scullion initially tried to get back to his US training base in Flagstaff, Arizona, only to be turned away by customs at Dublin airport, told his professional athlete visa wasn’t enough, and he ultimately needed special pardon from the US Embassy. Instead he’s heading for St Moritz in Switzerland for a spell of altitude training, eyeing a return in time to defend his Irish 10,000 metre title at the National Championships on August 22nd/23rd – assuming they still go ahead.

“I’ve been doing what I can here in Belfast, but I know I operate best when I take myself away. At the same time I wanted to make sure there were races to focus on, before that. But every event, even with the National Championships, the talk of the London Marathon, there’s always this asterisk beside it. It’s painful for the psychology, when we love or are so used to the guarantees. So you have to talk yourself into that psychology now.”

He’s still hopeful the Olympics will happen in 2021, but doesn’t think the organisers should draw the line there: “When I made a comeback, it wasn’t about the Olympics. It was just really good for my mental health, my happiness, and my drive. I was starting to get into a really bad place with all those areas. But it they don’t happen in 2021, I’d probably be in favour of them happening in 2022. It’s still the pinnacle, it’s like all other events should bow down to the Olympics, they’re still a lot of people’s biggest dream.”

– For more information on the virtual Dublin Marathon see www.kbcdublinmarathon.ie

1 My sporting disappointment: Jimmy White and the elusive World Championship
2 Rory McIlroy: Maybe I’m just not as good as I used to be
3 Ken Early: PSG would be sensible final move for Ronaldo
4 The Offload: Joe Schmidt the influencer is due a second act
5 World Rugby push back on extending residency rule
Real news has value SUBSCRIBE