If you had one point to save your life, you would probably want Sampras playing it 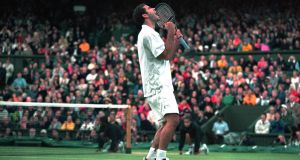 Hollywood endings are exceedingly rare among even the greatest champions. Muhammad Ali fought 10 more times after the hellfire of Manila left him with nothing more to prove, finally quitting after a bleak defeat to Trevor Berbick that was staged in the Bahamas because no US state athletic commission would license him. Michael Jordan came out of retirement for two meandering seasons with the Washington Wizards rather than ride off into the sunset after his game-winning jumper to clinch a sixth title with the Chicago Bulls.

No one can accuse Pete Sampras of not knowing when to leave the party. He entered the last tournament of his prodigious career, the 2002 US Open, on a career-worst run of form: no titles in 33 events, more than two years removed from his most recent major championship, and still smarting from a loss to the world No 145, George Bastl, in the second round of Wimbledon, the tournament that he had made his birthright. But the quiet Californian fought his way through the draw as the No 17 seed to reach the final at Flushing Meadows, where he saw off his epochal rival Andre Agassi in four gripping sets, pounding a career-high 84 winners in a performance he described afterwards as the “highest level I’ve ever played”.

At the time Sampras had won more major championships – the recognised metric of greatness – than any other man. No one then could have imagined it would take less than two decades for the American to be leapfrogged on the all-time leaderboard by three other players. Many of the other big-time records Sampras retired with, including most Wimbledon men’s titles in the Open era (seven), most weeks at No 1 in the ATP rankings (286) and highest career earnings ($43m), have also been surpassed at a remarkable pace. Life comes at you fast.

This makes Sampras, whose single-minded focus and businesslike commitment to substance over style places a heavier emphasis on records and results in assessing his legacy, something of a unique case study. Perhaps owing to the distance he has maintained from tennis since his retirement – unlike former players who hang on to the tour as broadcasters or coaches – lesser champions from more distant eras seem to resonate more in the public consciousness these days. Whatever the reason, it has been alarmingly easy for today’s crowd to forget just how dominant he was.

It was Sampras’s mental game, as much as his weapons-grade serve, punishing forehand and deft net play, that set him apart from his rivals. Endowed with a preternatural sense for finding the pattern of play that most disrupted his opponent’s rhythm, Sampras could strip the emotion out of the occasion and conjure his best tennis at the most important times. He might not have pulled the ace out every time he was break point down, but it sure felt like he did. The coolness, the composure, the calm. Even today, if you had one point to save your life, you would probably want him playing it.

The first hint of this steely fortitude and self-assurance came during his teenage years, when he made the preposterously risky decision under then-coach Peter Fischer to switch to a one-handed backhand and adopt a serve-and-volley style at the age of 14, forgoing short-term rewards on the junior circuit for the long game: winning on the slick grass of the All England Club. He grappled with self-doubt for two years while struggling to adjust, losing ground to an age-division rival Michael Chang and failing to make it past the third round at any of the four big USTA boys’ events in 1986.

But five years after dramatically overhauling his style of play, Sampras became the youngest ever US Open champion at 19, defeating Agassi in the final. After recommitting to his craft following a runner-up finish at the 1992 US Open, a transformative defeat Sampras described as a “wake-up call” , he won 12 of the 13 major finals he reached over the next eight years. Seven of those titles came at Wimbledon, the tournament he dreamed of winning as a child growing up in Rancho Palos Verdes, California. He finished No 1 in the world for six successive years from 1993 to 1998 – an achievement he cherished even more than his overall major titles mark for the day-to-day consistency it required – a record not even Federer, Nadal or Djokovic can touch.

You cannot talk about Sampras without talking about Agassi. The two Americans were perfect foils: one the greatest server of his generation, the other the finest return player. And let’s be honest: everyone wanted Andre to win except your one friend who played tennis. The free-wheeling, flamboyant kid from Vegas traded in a charisma that was tailor-made for a society that increasingly craved sensation over humility and discipline. Agassi, who freely vented his emotions in the spirit of American predecessors such as Jimmy Connors and John McEnroe, gave the people what they wanted.

Sampras, alternatively, comported himself the same way when he was two sets down as when he was two sets up. This unfashionable carriage may have contributed to his reputation as being “boring”, but Sampras didn’t care, at least not outwardly. He was less interested in being appreciated or understood than in winning. And win he did, more than anyone up to that point.

Which is why saying Sampras is remembered simply for being good at tennis is disingenuous and an understatement of his greatness. It is unspeakably difficult to dominate in a sport where mental toughness is always tested. The US, so thirsty for entertainment, doesn’t give enough credit to the art and we are poorer for it. Sampras may have been more Gary Cooper than James Cagney, but no player was ever more deserving of top billing.