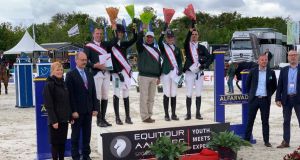 The victorious Irish team of Ger O’Neill, Susan Fitzpatrick, manager Taylor Vard, Jenny Rankin and Aidan Killeen, stand on the podium following their victory in the Nations’ Cup at Uggerhaine in Denmark.

The Irish show jumping team of Jenny Rankin, Aidan Killeen, Susan Fitzpatrick and Ger O’Neill scored their second Nations’ Cup victory within a week following a third round jump-off with Poland at Uggerhaine in Denmark on Saturday.

Thirteen teams competed in this three-star competition and, at the halfway stage, after which five nations dropped out, Morocco held the lead on just a single time fault, with Sweden in second on four, while Ireland were in a share of third with Poland on five.

The second round saw Rankin repeat her four-fault score from the first round with Deirdre Bourns’s Bennys Legacy before an excellent clear from Laois’ Killeen on HPJ Verdellen’s Fair Play (who had five faults first time out) moved Ireland up the leaderboard.

Fitzpatrick then completed a brilliant double clear round with her mother Sharon’s Fellow Castlefield before fellow Co Kilkenny rider O’Neill, who had just a time fault in round one, lowered a fence with Castlefield Vegas.

As Morocco dropped out of the picture when one of their riders was eliminated and Sweden also dropped back with nine faults in the second round, Poland and Ireland were left at the head of affairs as both teams finished on a two-round total of faults.

Poland selected Wojciech Wojcianiec as their rider to go against the clock in the deciding jump-off and he posted a fast time (42.35) with Naccord Melloni but left the door open when knocking a single fence. Tyrone’s Jenny Rankin and Bennys Legacy returned with a clear round in 51.34 to leave this Irish team as winners for the second week in-a-row.

Shane Carey had managed the squad a week previously in Drammen but here the chef d’equipe was Taylor Vard, who commented: “I really am delighted for all four of our riders, they were amazing. In the first round, I thought maybe it was slipping away from us but in fairness to the team, they really fought back in the second round to take the win. They showed great team spirit and it was a great team effort. Hats-off to the Polish team who pushed us all the way.

“We had made a plan from first thing this morning that if we did get into a jump-off, that Jenny would be the one to go for us as her horse would be freshest after jumping first and thankfully it all worked out.

“A special word of thanks must go to Shane Carey who, despite having a lot of horses here at the show himself, took time to help us all out throughout the week, and also to Gerry Mullins who played a huge part in the win last week and again today. Of course we have to thank our horses’ owners and all those working behind the scenes.”