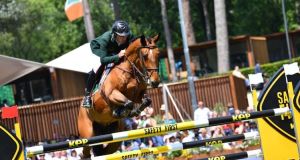 Ireland’s bid to win a first Italian Nations’ Cup failed narrowly in the Piazza de Sienna, Rome on Friday afternoon when the senior show jumping team, managed by Michael Blake, was beaten into second by Sweden who were winning for the second time in the 93-year history of the competition.

Both teams were in a share of the lead at the halfway stage, with Ireland’s contributing scores coming from Waterford’s Peter Moloney and Offaly’s Darragh Kenny, who had recorded clear rounds on Team Harmony’s Chianti’s Champion and Kerry Anne LLC’s Important De Muze respectively, and Louth’s Mark McAuley who had picked up four faults with the Eva Lundin-owned Jasco VD Bisschop. The eight faults accrued by Cian O’Connor and PSG Final were discarded.

McAuley came home with the same four-fault score in the second round at which stage Sweden held a slight advantage as their first rider, Henrik von Eckermann, jumped clear with Toveks Mary Lou. Moloney looked set to complete a double clear coming to the last, but the front bar of the final oxer fell to the floor and he crossed the line with a time fault as well while Sweden’s Angelie von Essen also had a pole down with Luikan Q.

Kenny picked up four faults at the first part of the combination and, as Frederik Jonsson had two fences down with Cold Play and picked up a time fault, the Swedes were already discounting his score meaning they had a one-fence advantage as it came down to the final line riders. Peder Fredricson, the reigning European individual champion, recorded a clear with H&M Christian K as did O’Connor who was last to jump with PSG Final. This left Sweden on eight and Ireland on 12 with Belgium and The Netherlands sharing third place on 18 faults apiece.

Blake was delighted with the team’s performance, saying: “I am very happy with how we performed. We had an entirely new set of combinations on this team so, from a development point of view, we certainly learned a lot today over what was a very tough course. You have to experiment at times and we now are in a position where some of our riders have two horses that have performed very well recently at top Nations’ Cup level. I would give a special mention today to Peter Moloney who really was excellent on his five-star Nations’ Cup debut.”

Earlier in the day, McAuley, who was first to jump of 37 starters, set an unbeatable time of 56 seconds to win the 1.50m speed class with Valentino Tuiliere on which he had finished fourth in a 1.50m two-phase class on Thursday. The show’s 1.60m Grand Prix, which has a prize-fund of €400,000, takes place on Sunday.

Competing at three-star level at Uggerhalne in Denmark, Ireland’s Ger O’Neill comfortably won the 55-starter 1.50m speed class when home clear in 72.90 on Home Farm Equestrian’s 11-year-old Anglo European-registered stallion Uncas S. Norway’s Johan-Sebastian Gulliksen got closest to the Kilkenny rider when he stopped the clock on 75.27 with David Guetta.

The main jumping action at home this weekend takes place in Ballinasloe where 41 horses have been declared for Saturday’s national 1.40m Grand Prix, sponsored by The Underwriting Exchange, while 29 combinations are due to start in Sunday’s TRM/HSI New Heights Champions Series 1.50m Grand Prix.

In dressage, Ireland’s James Connor, riding Casino Royal, achieved a score of 66.609% to finish fourth in the Grand Prix at Lipica in Slovenia. The winner, on 70.891, was Germany’s Jill de Ridder with Whitney 341.

With Casino Royal, Connor is one of six riders who have achieved the minimum entry requirements for this year’s European championships which take place in Rottendam, The Netherlands from August 19th to 25th. The other five riders are Kate Dwyer (Snowdon Faberge), Heike Holstein (Sambuca), Anna Merveldt (Esporim), Dane Rawlins (Espoire) and Judy Reynolds (Vancouver K).

Following recent results, three of the six, Reynolds, Merveldt and Holstein, have received invitations from the organisers to compete at the prestigious Aachen show in Germany (July 17th to 21st) where they will take part in the FEI Nations’ Cup competition.

Gillian Kyle, chair of Horse Sport Ireland’s dressage high performance committee said: “Obviously we are delighted that we are now becoming a well-recognised nation on the international dressage scene and to have three riders of this calibre to send to Aachen is a major step forward for the sport of dressage in Ireland.”

Ahead of next week’s Tattersalls international horse trials in Co Meath for which entries have been received from 14 individual nations, there is a national one-day event on Saturday at the nearby north Co Dublin venue of Killossery Lodge Stud.