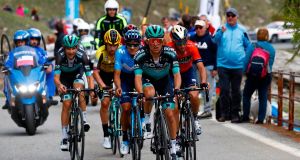 Following on from his long-distance breakaway and superb third place on Thursday’s stage of the Giro d’Italia, Eddie Dunbar was on the attack again on Friday’s stage to Ceresole Reale. The Irish man was part of the day’s big breakaway, with his Team Ineos squad seeking to put pressure on the other general classification teams.

Dunbar rode strongly but dropped back to help team-mate Pavel Sivakov. He was reeled in by the GC riders with 15km remaining. The stage was won by another rider who had been in the break, Ilnur Zakarin (Katusha-Alpecin), with the Russian reaching the summit finish 35 seconds ahead of Mikel Nieve (Mitchelton-Scott) and one minute 20 up on Mikel Landa (Movistar Team).

Dunbar was 35th, 17 minutes 10 seconds back, while Irish national champion Conor Dunne (Israel Cycling Academy) was 141st. Overnight race leader Jan Polanc (UAE Team Emirates) was distanced by the big names but had enough of a buffer to hold his pink jersey. He is now two minutes 25 seconds ahead of the race Primoz Roglic (Team Jumbo-Visma), with Zakarin jumping up to third overall. Dunbar stays 28th overall and remains sixth in the best young riders classification. The race continues on Saturday with another tough mountain stage.