The International Boxing Association failed to heed repeated IOC warnings on its governance and business dealings, some pointing directly at crime 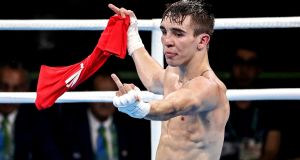 My dad sat beside Jim McCourt on the flight from Dublin to Tokyo on route to the 1964 Olympics. Most of the Irish team were onboard, flying KLM Royal Dutch Airlines, via Amsterdam, and it was soon after takeoff when McCourt opened a fresh pack of 20 cigarettes.

“I’m okay for the moment,” he answered.

They seemed an unlikely match: a lightweight boxer from West Belfast, an even lighter 5,000m runner from north Kerry, only they lit up like old school friends. McCourt had just turned 20, a hungry kid trying to make a name for himself, and made no secret of his fondness for a cigarette. He skipped and sparred until his knuckles bled, and nothing as cheap as a 1964 cigarette was going to harm his gold medal chances in Tokyo.

“And they help me to relax,” McCourt said, puffing gently on his second of the flight.

By the time they landed in Tokyo he’d finished off about 30, deftly squeezing the butts into the small ashtray between their two seats.

Some things have changed. Both these Olympians are staying forever young, only it was McCourt who left his properly indelible mark on those Tokyo Games, the one member of the 24-strong Irish team to return home with a medal.

As it turned out it wasn’t his smoking habit that cost McCourt gold, but more likely some dubious judging.

A natural southpaw, McCourt won through his opening three bouts, triggering some swelling of his left knuckle in the process. Already guaranteed bronze, he was still confident of beating his semi-final opponent, Velikton Barannikov of the old USSR, and proved it with some relentless, forceful punching in the final round.

Only for the judges to award it to Barannikov on a 3-2 score, baffling almost all those in attendance at Korakuen Hall.

McCourt certainly wasn’t alone: those 1964 Olympics were marred by several contentious decisions. One of the few utterly agreeable wins was the heavyweight contest awarded to Joe Frazier, probably because there was no way of messing with his result.

McCourt’s bronze was still a rare thing: the first Irish Olympic medal in any sport since the four won by Irish boxers in Melbourne 1956, along with Ronnie Delany’s 1,500m gold. It wasn’t until Moscow 1980 when Hugh Russell bridged the gap again with flyweight bronze.

Murder in the air

If McCourt felt robbed, it was nothing compared to how Fred Tiedt felt, eight years earlier, after his welterweight final in Melbourne against Nicolae Linca of Romania. In attendance that day was Lord Killanian, then president of the International Olympic Committee (IOC), and even he was biting his lip when the referee raised Linca’s arm and not Tiedt’s. There was murder in the air.

Boxing isn’t the only Olympic sport where some of the beauty is in the eye of the judges, only, unlike diving, or gymnastics, it’s the one sport still fumbling in the greasy till.

Based on the latest evidence the IOC were left with no option on Wednesday when suspending the International Boxing Association (AIBA) as the Olympic governing body for the sport, meaning the AIBA will play no part in the organising of boxing events in Tokyo 2020.

It seems things had gone from bad to worse since Rio 2016, where Irish boxing team manager Joe Hennigan claimed they had been informed that fights had been fixed.

One of the most dubious decisions came in Michael Conlan’s bantamweight quarter-final against Vladimir Nikitin, the Russian awarded the fight, prompting Conlan’s violent response that “amateur boxing stinks from the core right to the top”.

Since Rio the AIBA had failed to heed repeated IOC warnings on its governance and business dealings, some of which were pointing directly at organised crime. Unless the IOC cut it off completely there was every chance of more of the same at Tokyo next year, 56 years after McCourt’s experience in 1964.

It’s the first time in Olympic history any governing body of sport has been given the boot, and in announcing the decision IOC president Thomas Bach listed the various concerns around finance, governance, ethics and refereeing – all of which were highlighted in a 30-page report from an IOC inquiry committee set up last November to examine the AIBA’s affairs.

They seemed to centre around the election of Gafur Rakhimov as AIBA president last year despite his status with the US treasury department as “one of Uzbekistan’s leading criminals”, and known to Interpol as “an important person involved in the heroin trade” who was connected to the Thieves-in-Law organised crime group.

Rakhimov stepped aside in March, yet the IOC inquiry committee noted there was nothing to stop him from stepping right back in again.

They also questioned the offer from Russian businessman Umar Kremlev to personally clear AIBA’s $16 million (€14.3m) debt: the only thing they could find out for sure about Umar Kremlev is that his name isn’t Umar Kremlev, but rather Umar Lutfuloev.

And after being forced to close its Swiss bank account because of the Rakhimov links, the AIBA switched to the API Bank in Serbia, linked to Agrosoyuz bank, also accused by the US treasury of facilitating “significant transactions on behalf of the person who was on the sanctions list for activities related to weapons of mass destruction in connection with North Korea”.

Despite failing to win a medal in Rio, boxing remains Ireland’s most successful Olympic sport, 16 medals won in all, one more than all other sports combined.

The IOC insists boxing will maintain its place on the Tokyo programme, handing responsibility to a new taskforce chaired by IOC member Morinari Watanabe, president of the International Gymnastics Federation.

“I was instructed two days ago to head the taskforce,” Watanabe told Inside The Games website. “This was something I was totally unprepared for. I was not expecting this.”

Hardly the most assuring statement, and it’s still uncertain what weight categories and boxing quota will be offered in Tokyo. Yet with the AIBA out of the way at least it’s no longer a smoking gun.