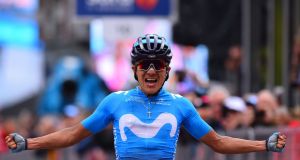 Team Movistar rider Richard Carapaz of Ecuador celebrates his victory as he crosses the finish line to win stage 14 of the Giro d’Italia from Saint-Vincent to Courmayeur. Photograph: by Luk Benies/AFP/Getty Images

Ecuadorian rider Richard Carapaz (Movistar Team) was best on Saturday’s 14th stage of the Giro d’Italia, attacking on the arduous Colle San Carlo climb, holding clear on the subsequent descent and then extending his lead on the climb up to the finish.

Carapaz crossed the line one minute and 32 seconds ahead of the Briton Simon Yates (Mitchelton-Scott), with former race winner Vincenzo Nibali (Bahrain-Merida) leading in the main general classification contenders a further 22 seconds later.

“We had two cards to play as Mikel Landa and myself are in good form,” said Carapaz afterwards, celebrating what is his second stage win in the race after victory on stage four. “But today, as Mikel wasn’t going very well towards the end of the stage, it was up to me to catch the right moment and the opportunity.

“With 25km to go, we realised that the Maglia Rosa was reachable, providing that I rode well downhill before the third category finishing climb that I knew would suit me well.”

Overnight leader Jan Polanc (UAE Team Emirates) cracked on a day with five climbs and eventually crossed the line seven minutes 41 seconds back. Carapaz’s time gain and the second time bonus for his victory saw him end the day in the race leader’s pink jersey, seven seconds clear of race favourite Primoz Roglic (Team Jumbo-Visma). Nibali is third, one minute 47 back, with Rafal Majka (Bora-Hansgrohe) and Mikel Landa (Movistar Team) both over two minutes behind.

“The Maglia Rosa has been my dream since I first got interested in cycling at the age of 15,” said new leader Carapaz.

Irishman Eddie Dunbar had a solid performance, playing a team role and then rolling in 22nd, seven minutes 20 seconds back. He advances four places to 24th overall, a superb showing in his first-ever Grand Tour. He remains sixth in the best young rider classification.

The Giro continues on Sunday with a 232 kilometre stage between Ivrea and Como. It is flat for much of the stage, but the final 70 kilometres are mountainous and could well break things up.