Irish rowers head for Boston for final pull at glory

Head of the Charles Regatta is one of rowing’s biggest events, with 11,000 competing 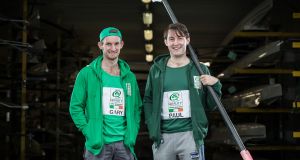 Paul And Gary O’Donovan team up again to compete in the men’s championship doubles in Boston, along with their friends and rivals Mark O’Donovan and Shane O’Driscoll. Photograph: Dan Sheridan/Inpho

It is huge sporting occasion, with 11,000 competitors and tens of thousands of spectators. The Head of the Charles Regatta in Boston this Saturday and Sunday gives top rowers from around the world a chance to end the season on a high.

Paul and Gary O’Donovan team up again to compete in the men’s championship doubles. Their friends and rivals, Mark O’Donovan and Shane O’Driscoll, will hope to get one over on them. Last season, Gary and Paul finished eighth, and they will be hoping to improve on that this time out.

Sanita Puspure will have strong hopes of winning on both days. She is in a “scullers eight” on the Sunday which features almost all the top women’s single scullers from the recent World Championships. On Saturday she teams up with Magdalena Lobnig of Austria in a double which goes off first. Cork Boat Club and Shannon have also entered crews, while Coleraine men Joel Cassells and Peter Chambers compete for Oxford Brookes.

Back in Ireland, the National Rowing Centre has had no electricity supply since Monday. Though trees were damaged in Farran Wood, the NRC itself suffered no damage. Rowers and rowing clubs, in common with the rest of the country, took advice and minimised the damage Storm Ophelia could do.

Last year, Gavan Hennigan was the fastest single oarsman in the Atlantic Rowing Race; he was honoured with a civic reception on Thursday in Galway. This year Ireland looks to have another excellent candidate. Damian Browne, a 6ft 6in former professional rugby player, whose former clubs include Connacht, Leinster, Northampton and Brive, heads for England on Saturday to send his boat off to the start of the Atlantic Campaigns race in La Gomera in the Canaries.

Browne will self-fund his row, but has separately raised more than €50,000 for his charities, Madra, Médecins Sans Frontières and the Strong Roots Foundation School, Rwanda. The school project is the passion of Blaise Pascal, a Rwandan who was an abandoned orphan but now betters the lives of those who were like him. Browne met him by chance when travelling through Africa.

The Galway man had to retire from playing rugby because of loss of cartilage in his knees – “I basically have none,” he says – but he has been packing in hours off the Atlantic coast of his native county. In some of these he has had to deal with breakages in the dark over long and tricky rows. He thinks these “difficulties in realistic conditions” should stand to him. Some of the most successful Atlantic rowers have had a very similar education.

Niall Beggan of Commercial was the fastest at the Dublin Sculling Ladder time trial on Saturday. The closest challenger to the 19-year-old was Sean Jacob (45). The Old Collegians man is a multiple winner of this event.