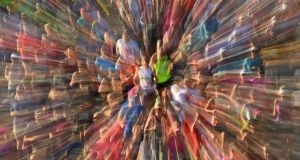 Competitors start in the Half-Marathon during the 2017 Melbourne Marathon in Australia. Photograph: Quinn Rooney/Getty Images

Like most major cities, Melbourne now has its very own marathon. It took place last Sunday, only these days it’s not just a marathon, but also a half marathon, a 10km and 5.7km run. A marathon festival, as they call it, all in one day, with a distance run suitable for everyone.

It seems that to be classified as a town or city you don’t just need a shop, a pub, a church and a school; you also need an annual running event of some sort. Most runs start off as a fundraiser for a local charity, to help build a community hall, or even support the local athletics club. Then before you know it they become part of the annual calendar.

Ireland is no exception, although I often wonder how all these running events manage to survive. It must be close to saturation point, but with more people than ever taking up running maybe there is still room for more events. It just means the quality is often reduced, the competition more diluted.

That is why I was shocked to hear last week’s announcement that after 40 years the Ballycotton 10-mile road race is no more. For almost as many years now this has been one of the most iconic events on the Irish road race calendar. Staged in early March every year, it’s always held more mystique than similar races. People came from all over the world to run this magical race in the tiny fishing village in east Cork.

I can clearly remember reading about the Ballycotton‘10’ in the Irish Runner and the Marathon magazine, checking out the photos and slowly scanning through the results, usually on a sneaky break from my homework, dreaming about one day taking part myself.

The best runners from all around Ireland came to Cork to try and win this special race, men and women who I looked up to, and women I knew ran for Ireland. I used to think ‘ maybe one day I would follow in their footsteps’.

I eventually got to run the Ballycotton ‘10’ back in 2001, around the time the numbers were steadily creeping up from a manageable 1,000 to the more recent 3,000 runners. Only now it’s got too big for the village and itself, the lack of parking and voluntary assistance among the reasons why the organisers have decided to end the event.

It means I will forever treasure the finishers’ mug that sits proudly in my kitchen, definitely one of my favourite race prizes.

This year also happened to be the 40th edition of the Melbourne marathon, and despite spending quite a bit of time here over the past 22 years, this was my first experience of the event. It also got me thinking about why some races survive and thrive, while others don’t, often for conflicting reasons.

I’ve taken part in hundreds of road races all over the world, from 3km to the marathon, yet rarely in Melbourne. A few months ago I got involved with a running group from Australia Post, a challenge for employees to sign up for an event on the Melbourne marathon festival weekend. I was there to provide training advice and encouragement for the weeks leading up to the event.

Every Thursday there was a group training session at lunchtime, and each week the group were looking fitter and getting faster. Some had run before, others hadn’t, so I decided to help challenge them and myself I should also sign up to the half marathon. At the time I was only running about 5km, a few times a week. What better way to lead than by example?

It’s also much easier to plan and visualise a training plan for others if you are also setting out a plan for yourself. We all need something to aim for, a good reason to get out and run a few times each week.

When running is not the priority in your day, it’s hard trying to juggle the time and stick to the training plan. Once the commitment is made and you sign up to run the priorities can quickly change. Knowing how to properly prepare is also the key to the enjoyment of any physical challenge.

I had a few bike rides planned on my last trip to Ireland, and even with a few obstacles thrown in my way, I figured if I could keep generally fit then I could get in enough runs to get me to the start line. At least I knew the Australia Post runners were turning up every Thursday, and improving every week, thus giving me some extra motivation at the same time.

Then there were the checkpoints along the way; The Great Pink run was great fun, but it was hard work; a few park runs too, but still I wasn’t very confident.

Every run has its own attractions, or a reason to join in, and for the Melbourne marathon, part of it is finishing in the Melbourne Cricket Ground (MCG).

By coincidence I was in the MCG last Thursday, to welcome President Michael D. Higgins to Melbourne. He was attending a lunch but also wanted to acknowledge the great feats of the late legendary Irish AFL player Jim Stynes, who is honoured with a statue outside the famous stadium.

Then there was the wall of honour of Olympic Champions from the 1956 Olympics. The President got to see Ronnie Delany’s name engraved alongside the 1,500m. Australia and Ireland may be thousands of miles apart, yet they remain strongly linked by a shared love of sport.

As we had lunch and listened to the President talk about the Irish diaspora around the world, I looked out over the ground, as the marathon finish line was being erected. Before leaving I then picked up my race number, still reluctant to even think about running 21.1km through the streets of Melbourne on Sunday morning.

It turned out to a perfect morning for a run; there were some 25,000 runners across all the events. It was an early start, the runners swept through the empty streets before most people were out of bed, just some friends and volunteers handing out water along the way.

This I reckoned was a little strange. I couldn’t help but think there should be more to this event than simply running through the empty city streets, so early in the morning, especially for the marathon runners. A big city marathon needs to be embraced by the people of the city, and if anything it needs to take over the city for the day.

It got me thinking about the Ballycotton ‘10’ and the energy such a run can bring to a village. The Dublin marathon is now embraced by a large part of the city for one day, not just the runners but for everyone whose house and shop and church it runs by.

There should also be a lot more to a city marathon than closing the streets and cashing in. Melbourne could actually learn a lot from a little village race like Ballycotton, including the spread that was put on there afterwards. Instead, there wasn’t even a bottle of water as you were ushered off the field and out of the stadium, a memory I won’t cherish for every long.