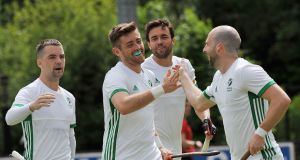 The uplifting news that both the men’s and women’s national teams qualified for next year’s World Cups passed with barely a murmur outside the hockey family.

As women’s rugby now eclipses hockey in its profile and place in the public imagination despite much greater numbers playing hockey, you wonder where it has gone wrong.

It is true that both men and women have full time coaches, whereas the lack of the appointment of a fulltime women’s coach in rugby makes it on to RTÉ’s Morning Ireland.

Two senior teams with Olympic status have now qualified for World Cups next year in hockey and Rugby 7s. That has not happened before.

Hockey can take credit for treating its male and female athletes equally and can take credit for having a system, which like rugby begins in the schools, very often the same schools as rugby, but if hockey didn’t appoint full time coaches would the national broadcaster take it up?

Hockey Ireland has a chance this year, as they did last year in the run up to Rio and as they did the few other times Irish teams have qualified for World Cups, to better the lot of their elite athletes, who will have full schedules in 2018.

The men will start their program with a tri-nations tournament in Spain at the end of January and compete in the Sultan Azlan Shah Cup in Malaysia in March. The program will also include some home games to be finalised.

Hockey calls the system it operates self-funding which means the coaches are paid and the administrators are paid and now the umpires are paid, while the athletes are asked to pay to represent Ireland. That all seems plain wrong.

It may sound churlish to raise the issue now but with national coaches Craig Fulton and Graham Shaw looking towards a tough, tough year ahead, it would help if Hockey Ireland upped its game and sought help in how to sell healthy, drug-free World Cup-qualified teams to a wider Irish audience.

And it would make sense if there was similar state funding for all teams. Let’s watch that space.