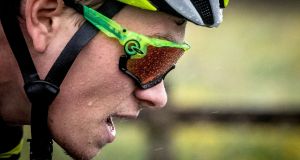 Marc Potts got Ireland’s European track championship campaign off to a fine start on Thursday when he finished fourth in the men’s scratch race. He was one of four riders who gained a lap early on and rode well from that point to ensure a high finish.

There are a total of nine Irish riders taking part in the championships, which are being held in Berlin and run until Sunday. On Friday Eoin Mullen competes in the men’s sprint, Felix English in the omnium and JB Murphy in the men’s elimination. Lydia Gurley rides the women’s points race.

On Saturday Xeno Young is in action in the individual pursuit, while Mark Downey goes in the points race. In the women’s events, Robyn Stewart will compete in the keirin, Boylan in the Omnium and Gurley in the scratch race.

Racing concludes on Sunday with five Irish in action. Downey and English double up in the men’s Madison, while Boylan and Gurley do likewise in the women’s equivalent. Stewart will do the women’s sprint.

Last winter the Irish had a superb track campaign, with some standout performances in the World Cup. Downey won the points race in the Apeldoorn World Cup in November, then took the same event in Cali, Colombia in February. His performances saw him secure overall victory in the World Cup standings for that event, a superb feat.

Downey and English won gold in the Madison event in Los Angeles and silver in Cali. It marked the first time Irish riders have achieved team success at this level. They went on to net sixth in the event in the track world championships.

In Cali, Gurley landed bronze in the women’s scratch race, while Lydia Boylan won the opening round of the women’s Omnium and finished sixth overall.

The team will aim to build on those performances in the European championships and beyond.

In other news, Nicolas Roche finished in the main bunch on the opening stage of the Tour of Guangxi in China on Thursday. The event is his final target for 2017 and he is hoping to use his current strong form to land a result. In 2011 he won a stage of the race’s predecessor, the Tour of Beijing.

Finally Philip Deignan has inked a one-year contract extension with Team Sky. “It was a very easy decision. I’ve been part of the team now for four years, I’ve settled in nicely and I’ve made so many good friends on the team,” he said this week.

“I like the way the team works with everything being quite scheduled out and planned. I find I work better in that environment and the team provides all of that for me with such a professional set-up and coaching. We’re so well looked after. It’s been a great experience for me so I’m looking forward to it continuing.”