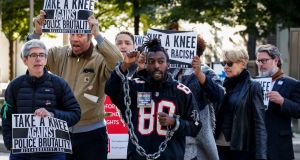 After a tumultuous month of hearing from the US president and some football fans who are angry at players who do not stand for the national anthem, the NFL owners left a two-day meeting agreeing to let their players protest but to work with them on the social issues they are trying to address.

A day after meeting players and union officials, the owners spoke among themselves for several hours on Wednesday in Manhattan. No specific resolution was proposed to strengthen the league’s rules on the anthem, and only a handful of owners expressed a desire for measures that would penalise players who did not stand.

Most owners, though, said they wanted every player to stand for the anthem but recognised that it would be misguided for the league to mandate it. “Look, we all want the players to stand, but as far as I’m concerned, because they want to stand as opposed to me having to tell them that,” said John Mara, a co-owner of the New York Giants. Mara said there was some conversation about changing league rules, which say players should stand for the anthem, but he said “the policy is not going to change.”

Mara was one of about a half-dozen owners who spoke to reporters after the meetings ended. Mara, Atlanta Falcons owner Arthur Blank and San Francisco 49ers co-owner Jed York said the owners were trying to move past the controversy, which has prompted fans to turn in season tickets, burn football jerseys and fly a plane over a stadium with a banner calling for a boycott of the NFL.

The owners said that while they knew some fans were unhappy with the protests – which began more than a year ago as a way to highlight issues affecting black Americans – it was important for them to listen to their players and the reasons they have been protesting.

President Donald Trump, though, did not appear to be backing down. On Wednesday morning, he continued to harangue the league for not doing more to force players to stand. “The NFL has decided that it will not force players to stand for the playing of our National Anthem,” he wrote on Twitter. “Total disrespect for our great country!”

Roger Goodell, the commissioner of the NFL, and several owners declined to address the president’s remarks directly. Instead, they tried to reinforce the notion that the owners and the players respect the flag and the military but that the few players who continue to protest during the anthem have a right to express themselves.

“What we’re trying to do is not get into politics,” said Goodell, who estimated that six or seven players were still protesting during the anthem. “We’d like to get that number to zero.” Goodell declined to say whether the protests during the anthem had affected the league’s bottom line. But some teams have faced blowback. Last week, the Jaguars took the unusual step of writing a letter to military leaders in the Jacksonville, Florida, area to apologise for protesting as a team before a recent game. Sponsors have also expressed concern to several teams, including the Dallas Cowboys, whose owner, Jerry Jones, has taken the unusual step of threatening to bench any player who does not stand for the anthem.

The anthem controversy is just one of several issues facing the league. League officials also spoke to owners Wednesday about some of the declines in television ratings this year. One owner said they were told that a big part of the decline was the continued interest in cable news programs, as well as the different viewing habits of younger football fans. The owner, who did not want to speak publicly about the private briefing, said league officials did not say the anthem protests were at all responsible for some of the declines in ratings.

Another concern for football, said Mark Cuban, the owner of the NBA’s Dallas Mavericks and a frequent critic of the NFL, is the safety of the game. Cuban said the NFL would become less popular as parents steered their children away from football and into other sports because of fears about chronic traumatic encephalopathy, or CTE, a degenerative brain disease linked to repeated head trauma.

“The NFL has got real structural problems,” Cuban said in a radio interview Tuesday. “I have an eight-year-old son – I would not let my son play football.” (New York Times News service)

1 Owens’s comments increase tensions ahead of FAI senior council meeting
2 Paul Stirling’s heart over head decision to play on for Ireland bears fruit
3 Harding Park, named after a lousy US president who never stepped foot on it
4 Leo Cullen says rotation will be key as Leinster look to keep on winning
5 Anthony Martial makes sure Lask don’t have the last laugh
Real news has value SUBSCRIBE

Sporting Cathedrals: Le Stadium - European fortress of the mighty Toulouse 06:00
Joanne O’Riordan: Why doesn’t streaming bonanza extend to women’s sport? 06:00
GAA playing the long game as they await loosening of spectator restrictions 06:00
Paul Stirling’s heart over head decision to play on for Ireland bears fruit 06:00
America at Large: When not taking one for the team is the wisest course of action 06:00
Here is your handy guide to sport on television this week