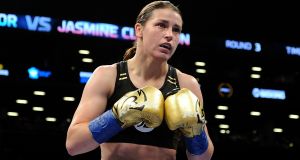 Katie Taylor will fight on the undercard of Anthony Joshua’s bout with Carlos Takam in Cardiff on Saturday October 28th. Photo: Emily Harney/Inpho

With just over a week to go before her first world title fight Katie Taylor has had her longest training camp in preparation for the biggest moment of her professional boxing career.

It has come after just six professional bouts over a year in which Taylor has hurtled through her opponents. Her final eliminator was also on an Anthony Joshua undercard in April at Wembley Stadium. In an epic, Joshua defeated Wladimir Klitschko with Taylor stopping German Nina Meinke.

“Since the fight was announced the weeks have flown by,” said Taylor. There’s an element of nerves for every fight. I’ve had the opportunity to box on big shows before but this fight without a doubt is going to be the biggest of my career and open more doors in the future. I cannot let this chance slip which brings pressure but it’s the type of fights I want.

“I train for every fight like it’s a world title fight. The great thing about this one is I’ve had a much longer camp. The last couple have been so close together. I’ve had a good few months preparing for this one.”

“When we first sat down with Eddie he wanted us to fight for a world title within a year and he’s stayed true to his word and delivered,” she said.

“It’s an honour to be fighting for the WBA title. I’m delighted with the progression of my pro career to date.

“It’s my first time at Principality Stadium – what a stage to be fighting on. Wembley Stadium was good preparation for this and I do love an Anthony Joshua undercard. This is more than a dream for me.”

Taylor’s clash with Sanchez is part of a huge night of action in Cardiff where Joshua defends his world heavyweight titles against late call-up Carlos Takam of France.

1 James Ryan injury could open the door for Ryan Baird
2 Lockdown hiatus may afford way back for Waterford hopefuls
3 Brentford eye €178m windfall with Premier League promotion
4 Errol Tobias: ‘I wanted to show what was possible when you looked beyond colour’
5 Matt Williams: Time wasting and stoppages are making rugby unwatchable
Real news has value SUBSCRIBE