IOC needs to wake up if they consider themselves woke 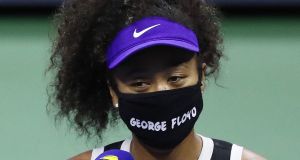 Japan’s Naomi Osaka wearing a mask with the name of George Floyd on it during an interview following her quarter-final win against Shelby Rogers of the United States at the US Open. Photograph: Matthew Stockman/Getty Images

The International Olympic Committee (IOC) has always sold itself as a state-of-the-art organisation, woke to the modern world. Carefully cultivated, image friendly and almost bursting from inflated self regard, it espouses goals of a peaceful, better world.

The IOC mission statement explains (reflux alert) “olympism seeks to create a way of life based on the joy of effort, the educational value of good example, social responsibility and respect for universal fundamental ethical principles”.

This despite anti-Semite and Nazi sympathiser Avery Brundage and out and out fascist Juan Antonio Samaranch presiding over the organisation for a total of 41 years, Samaranch in a 21-year spell that ended in 2001, when he was succeeded by Belgian Jaques Rogge.

No surprise then that in June an organisation once familiar with jackboot options copper fastened its hold on the athletes right to peacefully protest and insured what has been happening all week at the US Open tennis in New York cannot take place next summer in Tokyo. Or will it?

Apart from being tone deaf, it didn’t seem to strike the IOC that athletes have begun a process of reclaiming their sports, of using their position to advocate their own values and beliefs and not those of the wealthy individuals or corporations that ‘own’ them.

One thing the Black Lives Matter movement has uncovered is that the all powerful bodies that run sport and turn over hundreds of millions of euro each year are really owned by the athletes. They have shifted the power balance. They determine what they can say and do.

And the personal growth that sport so proudly boasts of nurturing has become less about disconnection and more about reconnection to real events that impinge on living. The weird concept of sport and politics not mixing was not only patently untrue but no more than a mechanism to neuter athletes and diminish their power. Anyway, they are too dumb to know what they are saying. Right?

In their offensively timed ruling the IOC confirmed athletes will continue to be banned from protesting after a number of sports including football, NFL, basketball, baseball, and tennis, moved to allow protests in the wake of George Floyd’s death in US police custody.

Citing rule 50 of its beloved Olympic Charter, they probably sounded more authoritarian than they would have liked when comprehensively outlawing any kind of demonstration or political, religious or racial propaganda in any Olympic sites, venues or other areas.

It added that athletes who breach the rule will be subject to discipline, having issued guidelines in January clarifying that banned protests also includes taking a knee. This comes after US Soccer’s board of directors, in June, repealed a policy that required players to “stand respectfully” for the national anthem.

In that light this week’s US Open tennis event will have been enough to send IOC president Thomas Bach to the home for the bewildered. Naomi Osaka has been effectively using the tournament as a one woman act of protest. Just try stopping her. On Wednesday she wore the fifth of seven face masks she brought with her to Flushing Meadow.

Already television viewers have seen the names of George Floyd, Trayvon Martin, Ahmaud Arbery, Elijah McClain and Breonna Taylor printed in large white lettering on the black face covering. The 22-year-old has a Japanese mother and Haitian father and grew up in the US.

Two weeks ago Osaka pulled out of her semi-final match at the Western & Southern Open in reaction to the police shooting of Jacob Blake. She subsequently posted a statement on her social media accounts:

“As a black woman I feel as though there are much more important matters at hand that need immediate attention, rather than watching me play tennis.” Rejoining the tournament she arrived for her match against Elise Mertens wearing a Black Lives Matter T-shirt.

But last month Osaka also suggested the IOC ruling is one she is prepared to meet head on. “I hate it when random people say athletes shouldn’t be involved with politics and just entertain,” she said. “Firstly, this is a human rights issue. Secondly, what gives you more right to speak than me? By that logic if you work at Ikea you are only allowed to talk about [furniture]?”

In July Irish 800m national champion Nadia Power, who has a Sudanese father and Irish mother, said the IOC decision sucked, that it was “kind of mad”. Others such as Patience Jumbo-Gula, Rhasidat Adeleke, Gina Akpe-Moses and Joseph Ojewumi are part of a wave of Irish talent emerging from the 60,000 people who identified their ethnicity as Black African or Black Irish in the 2016 census.

While the thunder in the US may just seem faintly related to the political weather in Ireland, it is increasingly an Irish issue. Everything Osaka, Megan “I’m not going to the f***ing White House” Rapinoe, LeBron James or Colin Kaepernick have done or said has relevance not just to a growing body of Irish citizens but to the notion of peaceful protest as an indicator of a confident, healthy society.

They should also know Ireland has a storied history of making protests throughout Olympic history from disrupting cycling events in Melbourne in 1956 to replacing official flags in Greece in 1906.

Osaka, a world number one and gold medal hope for the host nation Japan at an Olympic Games in Tokyo doing what she does. What could possibly go wrong next summer for an ‘unwoke’ IOC?