Glenanne hold on to top spot despite first loss of campaign 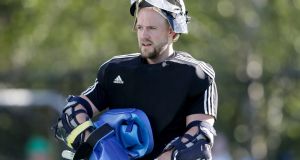 Glenanne goalkeeper Iain Walker was superb between the posts in a game of plentiful chances. Photograph: Laszlo Geczo/Inpho

Despite a first loss of the campaign, Glenanne remain clear at the head of the table after all three of the title contenders dropped points on Saturday.

For the Glens, they found Three Rock Rovers’ goalkeeper Jamie Carr in close to unbeatable form as he pulled off a series of world-class saves, including a penalty stroke stop from Joe Brennan.

At the far end, Iain Walker was also superb between the posts in a game of plentiful chances, played at a ferocious pace. Nonetheless, Rovers went 2-0 up at half-time courtesy of teenager Ali Empey’s first goal in the competition and a Luke Madeley drag-flick.

Former Belgian Under-21 international Jerome Saeys pulled one back but the game was settled by a blistering strike from Ross Canning following a lovely control for 3-1.

Lisnagarvey were caught by a YMCA ambush at Comber Road when the eighth-placed Dubliners twice took the lead with Thom Ritchie and Ben Campbell on the mark.

Troy Chambers salvaged a 2-2 draw for Garvey but they missed the chance to go joint top.

Guy Sarratt blasted Monkstown to their most significant win of the men’s EY Hockey League season to date as they beat Banbridge 4-3, adding to the shake-up at the top.

It leaves Garvey and Bann two and three points back, respectively, from Glenanne but with a game in hand, making for a thrilling six-week run-in.

Pembroke are also in the mix four points off the pace courtesy of their 2-1 win at Cork CofI while Rovers are outsiders six points back but are coming into form.

Their success was a third in eight days and their run-in includes five of their six games against sides in the bottom four.

Cookstown bolstered their chances of avoiding the bottom run but they were left to rue spurning a 2-0 lead against Annadale, drawing 2-2.