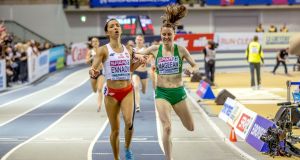 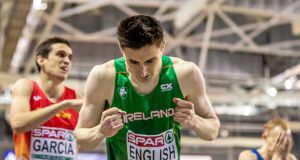 Rarely has a double Scotch bronze tasted so good. Because sometimes the best thing about winning championship medals is the reminder of what they tasted like before, and after wondering might that sensation be lost.

First Mark English over 800m, then Ciara Mageean over 1,500m, their bronze medals backed up podium positions at previous championships, only these are also marked by redemption and at least some sense of justification.

It also made for a properly memorable evening at the Emirates Arena in Glasgow, after a championship weekend than from an Irish perspective had opened up like a bad day on the stock exchange. There was a proper Scotch double for local favourite Laura Muir after she won 1,500m gold to go with her 3,000m title won on Friday night – thus defending both titles won two years ago – only Mageean’s chase on Muir over the losing three laps was properly spectacular too, even if she just passed for silver when the fast-finishing Sofia Ennaoui from Poland came back to snatch second.

Muir dictated the race throughout and won from the front in 4:05.9, only for Ennaoui to find a little more in reserve on Mageean as they came around the final bend, taking silver in 4:09.30 to Mageean’s 4:09.43. Still it was a brilliant effort by the 26-year-old Down woman, adding to her bronze medal already won outdoors at the European Championships in Amsterdam in 2016.

This double bronze now brings to 25 the number of medals in all won by Irish athletes at this level, beginning with Maeve Kyle back in 1966 (including the European Indoor Games). David Gillick over 400m and Derval O’Rourke over the 60m hurdles were the last to win two medals on this stage.

“I just though fight, fight, fight, stay tall, on the toes, and run through the line,” said Mageean. “I watched a video of my heat, and I pulled up too soon. You want to run through five metres past the line. I knew was in good shape, knew I was training well, in form, so to be able to deliver that out on the track means an awful lot. And I just wanted to walk off the track with my head held high. I’ve beat myself up before, after I’ve finished, but I go out to enjoy my athletics now as well.

“This also gives me great confidence going forward, and talking with my coach Steve Vernon there, and we’re delighted to bring this medal back to Ireland, and to bring it back to team Manchester as well, because that was a big move for me, going over there, and I’m delighted to get the result for them too.”

Still, it felt very close to silver: “Well, Ennaoui, she’s a tough runner, she came back, and there’s another battle here for another day. People always hit peaks and troughs, there are no just peaks, peaks, peaks in life. I’ve had tough injuries, and not everyone manages to get back up, and I know my career so far has me tough.

“And Laura is running fantastic at the moment and hats off to her, people put the gold medal around her neck going in, and it’s well deserved. She’s a real force to be reckoned with, and I take my hat off to her, but I want to keep improving in my career, improving my best, and being the best I can be.

“But we’re athletes, not robots, but to be able to prove the work I’ve been in as well, and delighted to see the Irish flag raised. I live to run in that green, white and gold. People talk about different things in athletics, but I don’t do it for the money, and the amazing times are very few and far in between.”

For English there was similar sense that second time round, this medal tastes that bit sweeter. There was extra incentive too: he was only added to the field after appealing his semi-final result on Saturday night, where he was obstructed by Britain’s Guy Learmonth, who had fallen on to the track, and not long afterwards was disqualified by the track judges for obstruction.

“It was more a reminder, yeah, and with seven people in the final there would be a lot more traffic. I knew I had the closing speed to match anyone. It’s nice to come back after four years, and that’s just the nature of this game, you’ve got to stick at it. You’re not going to win something every year, and I think that’s the lesson for any athlete coming through, just to stick at it, there’ll probably be more tough times than good times. But it’s worth it when you get the good times. It was more a case of I’d nothing to lose, just had to go out and push it. And I know with the extra endurance work I could stay with it. Thankfully it all worked out nicely.”

What happened the previous two times English made a championships 800m final – and in quick succession – was that he also won a medal, outdoor bronze in 2014 and then silver outdoors in 2015, beginning an upward trajectory which began with his schoolboy days in Donegal. On the night bronze felt every bit as good as any colour, for both.