Andy Murray: ‘I have no pain in my hip any more’ 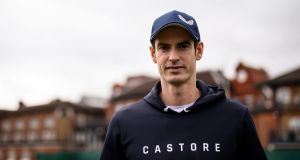 Andy Murray kept the door open on his tennis future on Wednesday, although he made no commitment to returning at Wimbledon this summer.

Five weeks after a second operation on his damaged hip, the former world No 1 said he was pain-free, but continuing with a rehabilitation programme he declared was “going pretty well”.

Nevertheless, his chances of making a comeback in July at Wimbledon, where he has won two of his three grand slam titles, look marginal at best. After losing in the first round of the Australian Open in January, Murray opted to have resurfacing surgery on his left hip in London last month – a year after a more invasive operation in Melbourne failed to heal his chronically painful hip.

“I want to see what it is I want to do when I finish playing,” Murray said at Queen’s Club when announcing a new kit sponsorship deal with Castore.

“I have other interests as well. If I wanted to go into coaching, commentary, all these sorts of things, I need to decide that more when I finish playing. This [involvement in financial support for small British firms] is something that, when it was initially discussed, it was quite exciting for me. I certainly would not rule out doing more of it in the future.

“I want to continue playing. I said that in Australia [where he lasted five sets against Roberto Bautista Agut in the first round]. The issue is I don’t know whether it is going to be possible. I’m a lot happier now, since I had the operation, than I was over the last 12 months.

“I have no pain in my hip any more, and I was in a lot of pain for a long time. The rehab has been slow but it’s been going pretty well. I just need to kind of wait and see how things progress. If it’s possible, I’d certainly love to compete again.”

1 David Clifford sends everyone back to their corners unbeaten
2 Six Nations: A 21st-century tournament that saw Irish rugby come of age
3 Six Nations: Ireland are contenders but England still the team to beat
4 Sublime 67 leaves Rory McIlroy right in the mix at Torrey Pines
5 Owen Doyle: Creeping professionalism of schools rugby a threat to the game
Real news has value SUBSCRIBE