LeBron gets emotional after passing MJ in career points 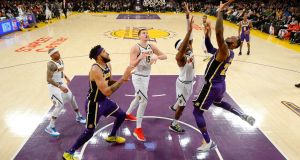 LeBron James reflected emotionally on his life and career after passing Michael Jordan to move into fourth place on the NBA career scoring list on Wednesday night.

His teammates congratulated him, a tribute video played, and at the next timeout, James sat alone on the bench with his face buried in a towel.

The reaction seemed fitting for a player who idolized Jordan growing up.

“I don’t know, man, a lot of the stuff I’ve done in my career, this ranks right at the top,” the 34-year-old veteran said after the game. “For a kid from Akron, Ohio, that needed inspiration, needed some type of positive influence, MJ was that guy for me.

James tied Jordan when he drained a 19-foot jumper midway through the second quarter. A minute later, he passed the Hall of Famer when he drove to the basket for a left-handed layup.

James has three NBA titles to his credit and Malone has none, but the other three members of the top five in scoring have extensive ring collections. Bryant has five while Jordan and Abdul-Jabbar each have six.

And if James is going to add to that total this season, he and his Lakers will need to get things going in the other direction in a hurry with the team at 30-35 and 6 1/2 games out of a playoff spot.

James missed 18 games earlier this season because of a left groin strain, but he has vowed not to sit out for rest down the stretch.