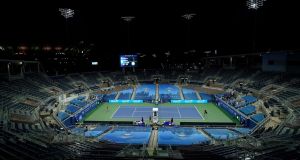 Serena Williams in action in an empty stadium during the Western & Southern Open tennis tournament in New York. Photograph: AP

Serena Williams likened the frustration she felt in Tuesday’s shock defeat by Maria Sakkari at the Western and Southern Open to that of being stuck in a bad relationship.

It was a second exhausting three-setter in as many rounds for Williams, who squandered the opportunity to close out the contest on serve in the second set before her Greek opponent launched a comeback.

“It was tough. I literally should have won that match. There was no excuse,” Williams, who at one point flung her racket into the empty stands and also received a time violation, told reporters.

“I literally put myself in this situation. You know, it’s like dating a guy that you know sucks. That’s literally what I keep doing out here. It’s like I have got to get rid of this guy. It just makes no sense. It’s frustrating.”

“It was hard. I had so many opportunities to win and I have to figure that one out, like how to start winning those matches again.”

Williams, whose match fitness had been questioned ahead of the Open, said she was also struggling with cramps towards the end of the match.

“I started cramping but shouldn’t have been in that situation,” she added. “I don’t think that helps mentally when it’s like, you know the match is over and you have won, and now your legs were already tired and now they’re even more tired.”

Meanwhile Andy Murray’s return to tennis suffered a blow as he suffered a third round straight sets defeat against Milos Raonic.

After beating Frances Tiafoe and Alexander Zverev in his first competitive matches for nine months, Murray took on Raonic having beaten him in their past eight meetings stretching over eight years, including the 2016 Wimbledon final. But the 29-year-old Canadian gained revenge in a rain-interrupted match, winning 6-2 6-2 in an hour and 28 minutes.

Raonic, ranked 30th to Murray’s current mark of 134, held the ascendancy in most departments, winning 88 per cent of first serve points and 55 per cent on his second serve, compared with Murray’s figures of 66 per cent and 36 per cent.

He served 10 aces to Murray’s two, and staved off the only two break points Murray could establish, whereas the Scot could save only three of seven against his own serve.

After play was interrupted by torrential rain following the first set, 33-year-old Murray would have hoped the break would afford him the chance to regroup against his younger opponent. But the big-serving Raonic continued his powerful game upon the resumption.

After he claimed one early break of serve, a key moment came when Murray racked up his two break points with Raonic serving at 3-2. The former world No 3, however, denied the dual Wimbledon champion with successive cool volleys, then immediately secured a decisive 5-2 lead by breaking the dogged Murray from deuce.

Raonic then held serve for the match and is yet to be broken in 29 services games through three straight sets wins in the tournament.

“It was poor. I didn’t play well. It was not a good day,” said Murray. “The positives are that I got three matches in. Physically, I pulled up OK.”

The New York tournament is serving as a warm-up event for players ahead of the US Open, which begins on August 31st.