Tipping Point: Thousands will fill the roads for an event that’s a symbol of France 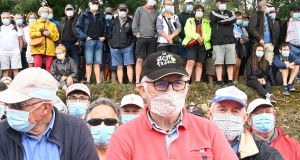 Even a global pandemic can’t shake that French penchant for the big gesture. The 2020 Tour de France begins on Saturday. At a time of coronavirus the practical priority will be to ensure it finishes in Paris on schedule. The wider question plenty are asking is whether it should leave the start line at all.

The Tour departs from Nice at the start of a 3,470 kilometre route that will see a travelling circus of several thousand people traverse the country for three weeks. Many more thousands will congregate on the roads observing an event that is a symbol of France. On TV, the eyes of the world will be watching. What could go wrong?

Well, almost anything really. The list of what might bring the whole thing shuddering to a halt is vast. Some health experts argue that the Tour going ahead isn’t so much a defiant flourish against a deadly enemy as a reckless ‘grand folie’ which risks public health.

The UCI’s health framework against Covid-19 includes testing protocols before and during races as well as the introduction of team ‘bubbles’. Those protocols are to be stepped up for the Tour with tests also planned for rest days. Already though there are concerns about breaches of the bubble rules as well as a rather imprecise official line on what happens if positive tests start to occur.

Reports suggest team will have to withdraw if two riders or staff show symptoms or test positive for Covid-19. However, apparently the race will continue even if there is a confirmed case of coronavirus. It’s a neat two-step that smacks of an attitude of let’s get started and see what happens.

But what if a rider does test positive for Covid-19? Or if they just show symptoms of the illness? What sort of ethical dilemmas are thrown up by deciding who can or cannot race in a context of who knows how many people can be exposed to the virus? More prosaically, is there a legal nightmare waiting to happen if someone objects to being thrown out?

What if most of the teams get thrown out, or the wearer of the yellow jersey gets forced out on the final day? Flourish would get reduced to farce.

Roadside spectators are expected to wear masks. But that looks all but impossible to strictly enforce along a daily 200km route. Inebriated and over-enthusiastic fans crowding around both each other and the riders as they climb up a Col is a Tour ritual. Presuming on public restraint in such circumstances presumes too much.

What the impact will be of images from all this in a context of spiralling virus transmission rates is hard to gauge. However the spectacle of a giant corporate sporting event winding its way throughout the country, with all the inherent potential for an unwitting spread of the illness within it, has the potential to turn into a massive PR gaffe at the very least.

Nevertheless it is going ahead. There’s a lot tied up in it economically. But even at the highest levels of the French government there’s a sense of the national spirit demanding it proceed. Perhaps no other sporting event in the world comes bound up in so much identity as Le Tour. It means the highest sporting stakes are being gambled with for the sake of a vague pay-off.

If it all sounds very French the essential dilemma is the same everywhere. The only difference is scale.

How best to balance public health and morale has been to the forefront of debate here too. Juggling the risk of controlling an infectious disease with the benefits of an increased sporting schedule has proved notably controversial. Official caution here is in stark contrast to the French government’s readiness to let a sprawling event like the Tour go ahead.

There is already widespread public resentment at the government here for keeping sport behind closed doors for at least another couple of weeks. There’s also anxiety about the policy being maintained into the foreseeable future. So it’s perhaps no coincidence how it is the GAA which is kicking the government traces most vigorously.

On the face of it, and allowing how the concept of everyone being in this together is fraying at the edges, for an amateur sporting organisation to demand the health authorities explain themselves during a pandemic seems astonishing.

However it’s not like the GAA hasn’t form in arguing for a relaxation of restrictions, or that most other sporting bodies privately don’t agree with them. They’re just not as blunt about it, possibly because they don’t have the same clout, or they’re obliged to play a more restrained political game because their economic hands are tied.

However no such barriers exist to the country’s biggest sports organisation expressing what it feels to be the mood of much of the country. There is no question a lot of people’s lives are the poorer for not being able to attend events. Only time is likely to reveal the full collateral damage of fighting coronavirus by denying such a vital social outlet.

It makes morale a lot more than a blurry concept. It seems there’s enough to it to justify risking the Tour de France taking place. The problem is that national morale is a largely intangible factor no matter what the country. Its benefits are impossible to calculate in comparison to the hard statistics and data the health authorities are working with. There’s nothing vague about a death rate.

Maybe over the coming weeks the most famous bike race of all will deliver a much needed psychological boost far beyond France. It could also provide valuable lessons in how to best juggle that delicate balance between health and morale. But if the charge here is that the authorities err too much on the side of caution, it’s just as valid to fear the French are gambling an awful lot for a concept.

1 Maradona’s terrible, terminal journey from human to myth divided him in two
2 Tipperary footballers revert to blue-and-gold for All-Ireland semi-final against Mayo
3 Rugby Stats: Ireland have found bonus territory hard to come by against the best
4 ‘God is dead’: The world’s front pages remember Diego Maradona
5 Diego Maradona: A genius and the soul of a nation
Real news has value SUBSCRIBE