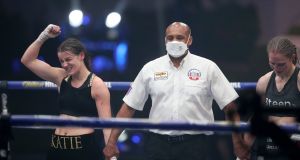 “I knew it was going to be tough and I had to dig deep at some stage in the fight,” Taylor told Sky Sports.

“But I thought I boxed better than the last time, even though I got drawn in a few times, and that’s what got me the win in the end.

“You can’t relax against Delfine, you know she’s going to come and come and we’ve had two amazing fights.

“I thought it was a lot more convincing tonight.”

This was a highly-anticipated rematch after their controversial contest in New York in June 2019.

Taylor won a contentious points decision at Madison Square Garden on a night when many observers felt Persoon had done enough to get the verdict.

Taylor started well in Saturday’s second encounter and pushed Persoon back with a couple of strong left hooks.

Persoon was heavily marked under the right eye in the second round as Taylor continued to dominate. But the Belgian’s high work-rate began to trouble Taylor and the Irish champion also sustained a nasty swelling on her forehead.

Persoon refused to take a backward step and she landed a high volume of shots, with her right hand proving highly effective.

Taylor responded with a burst of punches on the bell as Persoon tumbled to the floor almost in exhaustion.

Person, who said after the fight she might have broken her nose in the second round, was gracious in defeat and felt Taylor had done enough to retain her WBC, IBF, WBO and WBA titles.

Jones says Barbarians fiasco made rugby a ‘laughing stock’ 07:29
Arsenal put three past Dundalk in comfortable win; O’Gara expecting shootout in Paris 07:12
Conor Murray cautious ahead of Ireland’s Six Nations finale with ‘dangerous’ France 07:15
Louth starting afresh 10 years on from Leinster heartbreak 07:31
Jackie Tyrrell: We’ve got the championship back. But where’s the physicality? 06:00
Here is your handy guide to sport on television this week