Naomi Osaka opens up about her experiences of race issues 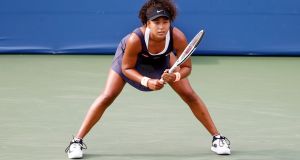 Naomi Osaka waits for a serve during a second round match at the Western and Southern Open at the USTA National Tennis Centre in Flushing Meadows, New York, US. Photograph: Jason Szenes/EPA

Naomi Osaka has spoken about her experiences of being black and Japanese, as well as her memories of her mentor Kobe Bryant, in an interview with WSJ Magazine published online on Tuesday.

The two-time grand slam champion was born in Japan to a Japanese mother and Haitian father. The family moved to the US when she was a child, but she says she noticed she stood out when she was in Japan, the country she competes for.

“I’m just trying to put a platform out for all the Japanese people that look like me and live in Japan and when they go to a restaurant, they get handed an English menu, even though it’s just a little microaggression,” she said.

The 22-year-old recalled an incident when she was a girl and playing against a Japanese opponent.

“She was talking with another Japanese girl, and they didn’t know that I was listening [or that] I spoke Japanese. Her friend asked her who she was playing, so she said Osaka. And her friend says, ‘Oh, that black girl. Is she supposed to be Japanese?’ And then the girl that I was playing was like, ‘I don’t think so,’” Osaka told the magazine.

“I remember that specifically because, yeah, I sometimes feel like a lot of people think that way about me.”

The US has seen a wave of protests against racism and police brutality in the last few months. Osaka said she believes problems of race in Japan are down to ignorance rather than hate.

“The issues of America don’t really translate that well in Japan, so sometimes they do blackface and things like that, and it’s a bit ignorant . . . It’s not really a hate thing,” she said.

Osaka attended Black Lives Matter protests this year, and dismissed the idea that athletes should only focus on sports.

“I hate when random people say athletes shouldn’t get involved with politics and just entertain,” she said. “Firstly, this is a human rights issue. Secondly, what gives you more right to speak than me? By that logic if you work at Ikea you are only allowed to talk about [furniture]?”

Osaka also reflected on the help Bryant, who died in a helicopter crash at the start of this year, gave her as she found fame following her victory at the 2018 US Open.

“There would be some really tough losses. I didn’t even know he was paying attention, but he would text me positive things and tell me to learn from it,” Osaka said of the NBA superstar. “For me, it was definitely helpful.”

Osaka will compete at this year’s US Open, which is due to start next week. - Guardian