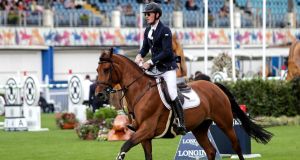 The international action of the Tryon Fall Festival in North Carolina concluded on Saturday with a one-two for Ireland in the featured 1.45m Grand Prix.

Fifteen of the 56 starters progressed to the jump-off round with seven of these recording a second clear, the fastest being Derry-born Daniel Coyle on Ariel Grange’s nine-year-old Zangersheide mare Legacy (35.340). Kilkenny’s Richie Moloney finished second with Equinimity LLC’s Rocksy Music (36.024) while Limerick native Paul O’Shea was seventh on Skara Glen’s 7 Pillars (39.088).

“It was a very good course,” said Coyle of the Anthony D’Ambrosio-designed track. “There were lots of places to make errors. Although there were lots of clear rounds, it didn’t walk that way, and I didn’t think it would have that many.

“I watched the first few go in the jump-off, and I had already planned seven strides from one to two, which was far away and very big, but my mare has a very big stride. You didn’t want to be too tight back to the Liverpool, and then the last three jumps were really just off your eye, so it was the beginning of the course and the related distances where I probably made up the most time.

“This horse is very, very special and I think she’s a real contender for the Olympics next year,” said Coyle of Legacy. “Ariel and I made the decision a few years ago to buy her for the top, top level, and every time we ask her to do something, she proves herself. Next year we’re hoping is going to be a big year for her.”

In Washington, Coyle’s brother Jordan was one of four Irish riders who competed in the night’s 1.60m jump-off class (a Longines FEI world cup qualifier) but he retired Eristov in the first round where Co Offaly’s Darragh Kenny picked up eight faults on Classic Dream. Kerry-born Captain Brian Cournane and Cork’s Shane Sweetnam shared sixth place when having a fence down apiece in 59.34 with Armik and Chaqui Z respectively.

Only two of the 30 starters went through to the second round where the USA’s Laura Kraut won the President’s Cup for the first time although picking up four faults with Fleurette. Her compatriot Andrew Wells had a refusal at the second fence with Primo Troy en route to finishing second with 12 faults.

From a starting line-up of 39, seven riders made it through to the jump-off of the 1.60m five-star Land Rover Grand Prix in Helsinki, Finland with six of these going double clear. Tipperary’s Denis Lynch did so in 36.80 with GC Chopin’s Bushi but the honours went to Britain’s Robert Whitaker on board Catwalk IV (35.89).

LA Rams see off Chicago Bears in a battle of the defences 08:45
Gerry Thornley on size of Ireland’s Parisian task; Son the star for Spurs again 07:48
Eddie Jones says he can’t guarantee England players will follow Covid-19 rules 06:55
Drogheda in the driving seat as Division One reaches a thrilling finale 06:00
Regionalisation may be the key as league adjusts to new reality 07:52
Here is your handy guide to sport on television this week