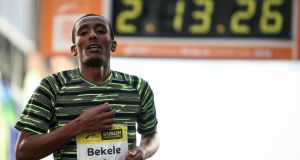 A record entry of 22,500 from home and abroad, a 40th anniversary special, and the promise of a day sent straight from marathon-running heaven. The cards have fallen nicely for Sunday’s 2019 KBC Dublin Marathon yet at 26.2 miles, 42.1km, or around 138,000 feet the distance and challenge remains the same as ever.

For most of those 22,500 – a complete sell-out just 40 days after the 2018 event – getting to the finish on Merrion Square will be their only prize and just reward; for elite runners there is more at stake, including potential ranking points towards next year’s Tokyo Olympics.

Since 2000 the Dublin Marathon has also doubled as the National Marathon, and that is where much of the elite interest will lie on Sunday – as well as the race for the outright winners, defending champion Asefa Bekele from Ethiopia and his country woman Mesera Dubiso both back again in search of the top prize of €12,000.

The 2018 race also saw the Irish presence moving closer to the top spot. Lizzie Lee, not racing on Sunday, finished third best woman overall, with Mick Clohisey sixth overall and back this year to defend the Irish title won for the first time last year.

The Raheny man will have to contend with three previous national champions Gary O’Hanlon (2017), Sergiu Ciobanu (2009, 2010, 2019) and Sean Hehir (2013), with Stephen Scullion, who recently ran in the World Athletics Championships in the searing heat of Doha just a month ago, also intent on making his mark.

David Flynn from Clonliffe Harrier, placed 13th last year in a time of 2:19:04, boasts the fastest half-marathon time of the season, and is also capable of winning his first title.

Mark Kenneally will be looking to turn back the years having made the Olympic marathon team in London 2012, while Hugh Armstrong is one of the interesting debutants.

Also in contention for top Irish woman will be Ann Maire McGlynn who ran a personal best of 2:39:22, also in Rotterdam, earlier this year.

First staged in 1980 with an entry of 2,100, Dublin is now the fifth largest big-city marathon in Europe. In 2016 the event was moved from its traditional Bank Holiday Monday to the Sunday, which race director Jim Aughney said directly contributed to the first sell-out of runners of 19,500, a 30 per cent increase on 2015.

Among those running is Gordon Harold, professor of psychology at the University of Sussex and Trinity College, Dublin, who is running under Me For You Marathon, to help recognise and campaign for mental health

“The aim is to be united in the recognition that no matter where we finish or how fast we run or walk, we recognise that mental health is an issue that can affect us all. Those we love, our friends and family.

“But that we are equally part of the solution and collectively part of an event that can be the catalyst for national and international recognition of the power of running as a force for good in improving the lives of those who experience not only the loneliness of the long-distance runner, but the loneliness of life blighted by the everyday challenge of poor mental health.”