Seán Murray and Shane O’Donoghue each score twice in Vancouver 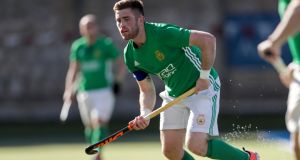 Shane O’Donoghue scored twice in the first leg of the Olympic qualifier against Canada in Vancouver. Photograph: Laszlo Geczo/Inpho

Late goals from Seán Murray and Shane O’Donoghue ruthlessly punished Canada’s indiscipline to put Ireland in a golden position in pursuit of Olympic qualification in Vancouver on Saturday.

Both scored while Floris van Son was in the sin-bin, handing Ireland a 5-3 win over to carry into Sunday’s second leg (9pm Irish time, Live RTÉ News Now, BT Sport 3) with the aggregate score deciding the ticket to Tokyo 2020.

Skipper for the day Jonathan Bell said of the result: “It’s a good half-time score but that is all it is. The guys came out and played with a lot of energy, a lot of passion and focus in what we did.

“Maybe we conceded a couple of goals that we would have liked to have kept out but Canada are a quality side. We have to step up tomorrow again.”

It was a performance a world away from the downtrodden showings at August’s European Championships with new coach Mark Tumilty managing to summon serious belief from his troops.

Indeed, they had to overcome a late blow in the build-up when goalkeeper and captain David Harte was ruled out of the weekend’s games on Friday with an ankle injury.

They started brilliantly, employing a healthy attacking outlook, and were ahead on eight minutes through one of the returning players, Chris Cargo, who fired home on his backhand after affecting a turnover.

Ireland levelled early in the second half when Van Son took the first of his two sin-binnings, O’Donoghue dragging in an emphatic flick for 2-2. Murray slapped in the next after John McKee – another returnee – retrieved what seemed a lost cause at the left baseline.

Jonathan Wallace nicked a third Canadian goal but when Van Son was shown yellow with 11 minutes to go, Ireland took control of the contest. Murray guided in a touch at the back post from Stu Loughrey’s cross before O’Donoghue blasted in another – his 110th international goal – for 5-3.

They now have a precious lead going into the second leg with a ticket to Tokyo within touching distance.