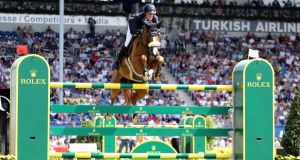 Darragh Kenny was the only Irish rider to win prize-money in Sunday’s lucrative Grand Prix of Aachen, picking up €100,000 when finishing fourth on Babalou 41.

From a starting line-up of 40, the Co Offaly native was one of five riders who managed to record two clear rounds to take part in the jump-off. First to go against the clock with Jack Snyder’s 13-year-old Balou du Rouet mare, Kenny left three poles on the ground for 12 faults in 42.12.

Brazil’s Pedro Veniss had the first third round clear on Quabri de l’Isle (41.62) before Germany’s Marcus Ehning had the home crowd on the feet when clear in 38.34 with Pret A Tout which he partnered the previous Thursday when Germany won the Nations’ Cup ahead on Irish team which included Kenny and Babalou 41.

Next in, Switzerland’s Steve Guerdat picked up 12 faults on Bianca but in a slower time (44.05) than Kenny to finish fifth. Portugal’s Luciana Diniz tried hard to get her hands on the first prize of €330,000 but she was over two seconds slower than Ehning when stopping the clock on 40.96 with Fit For Fun 13.

Ireland’s under age riders enjoyed another successful weekend in Europe, this time at Valkenswaard in The Netherlands where Wexford’s Harry Allen (17) won three classes, including an Under 25s’ 1.50m speed competition on Saturday with Dis Moi Tout de Clairbois, while there wins in Sunday’s pony section for Ryan Sweetnam and Ciaran Nallon,

Seven combinations advanced to the second round of the 1.50m competition but Lennon was the only one to go clear again, and in the fastest time, with Victoria Loane’s 12-year-old Touchdown gelding.