Tom Power was stalwart of Admiral’s Cup and Fastnet race, and member of WOW crew 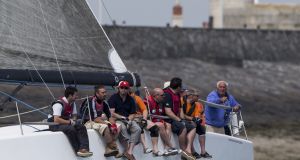 The late Tom Power (right) who died on June 1st, on George Sisk’s WOW as tactician and navigator in July 2013. His sailing career has spanned more than 40 years. Photograph: David Branigan/Oceansport

The steady sweep of the old Baily Lighthouse optic in Dún Laoghaire’s former Mariner’s Church could hardly have been a more fitting backdrop for a sailor’s memorial service this week.

Dependable, ever-present, an aid to navigation and a waypoint to home, its loom would have been familiar to the late Tom Power from decades of offshore sailing around these islands and further afield.

A stalwart of many Irish forays to Cowes for the Admiral’s Cup, he was part of the winning team behind the 1987 Fastnet Race win as well as victory in the Round Ireland Race plus dozens of other major events.

More recently, he was a member of George Sisk’s crew on the WOW series of boats, representing the Royal Irish Yacht Club in Dún Laoghaire as tactician and navigator that formed the boats’ “after-guard”.

He will be missed on board the latest WOW and throughout the fleet for the start of the Irish Cruiser Racing Association’s National Championships, sponsored by Frank Keane BMW, that will be sailed over three days at the weekend.

Both race courses will have one minute’s silence shortly before the first race when the two committee vessels will sound a long blast on their hooters.

After that, the long-awaited competition that was missed in 2018 due to weather and facilities problems in Galway will see 93 boats from two dozen clubs and venues around these coasts compete for five divisional championship titles.

Sisk’s WOW will be amongst nine Division Zero boats that will sail three long coastal races over the weekend, with Jay Colville’s Forty Licks from East Down and Frank Whelan’s Greystones likely to be strong challenges for the class.

However, the biggest turnout will be amongst the Divisions One, Two and Three fleets that account for the bulk of the regatta while, unusually, the smallest boats of Division Four and the White Sails have relatively small turnouts.

An overall winner will also be declared based on lowest average scores in addition to the national titles.

Persistently light winds on the Bay of Biscay this week has seen the 47-strong fleet of Figaro single-handed sailors delayed by more than 36 hours on the 550-nautical mile opening race of this year’s series from Brest to Kinsale.

The leaders were last night expected to reach the shortened course at the Old Head of Kinsale rather than off the town quay on the inner harbour, with barely three days remaining to catch up on sleep and prepare for the second leg.

Ireland has two entries in this, the 50th edition of the famous French-dominated event that is considered the breeding ground for the world’s top ocean sailors, many of whom are counted in the fleet this year.

Tom Dolan from Meath on Smurfit Kappa had been amongst the frontrunners after Sunday’s start, but, when the fleet split across two wind zones, he found himself at the back of the overall standings – close to 40th place.

Mayo’s Joan Mulloy on Believe in Grace/Businesspost.ie is also at the very back of the standings due to lack of sailing time from the start of the year in the new Figaro 3 class that features foil-assisted hulls.