‘Decision to turn professional was not easy. I felt time was right for me and my family’ 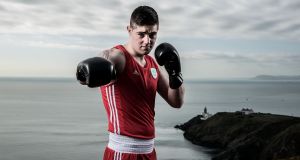 Joe Ward will not be competing for Ireland at the Olympics. Photograph: Inpho

Ward is the current captain of the Irish boxing national team, and has won gold medals at the World Junior and the World Youth Championships, as a well winning the European Amateur Championships three times.

He has also brought home silver twice at the World Amateur Championships and represented Ireland in the 2016 Olympics in Rio. The Westmeath native was expected to be a powerful contender for a medal at the 2020 Olympics in Tokyo.

“I’m excited to begin my professional journey under the guidance of Times Square Boxing,” said Ward. “I loved fighting for Ireland and had a very rewarding amateur career. I was happy that I could bring success and medals to my country, and that in the past few years I could help mentor some of my younger teammates.

“My decision to turn professional was not easy. I will miss my team, however, I felt the time was right for me and my family. I’m excited to represent my country in the professional ranks and bring a world championship home to Ireland. I believe it is important to surround yourself with the right people and I found great partners in Joe Winters and Adam Glenn at Times Square Boxing, who understand the sport and business of boxing.

“I immediately connected with Joe Winters and the fact that Joe’s mom was from Ireland and he still has a lot of family in Ireland. I’m confident Times Square Boxing will help me achieve my professional goals to become a world champion.”

Winters, who is the chairman of Times Square Boxing describes Ward as “a rare talent that only comes along once in a generation. We are excited for Joe’s future. We believe he will become a superstar and a future world champion. He is a great young fighter and a dedicated family man. Joe is good for the sport of boxing and he will continue to make Ireland proud.”

Times Square Boxing say they are currently negotiating with several boxing promoters to finalise a promotional contract for Ward, with the date of his first fight soon to be released.

Lewis Hamilton the fastest in Austria Grand Prix practice 12:27
Ole Gunnar Solskjaer: ‘The sky’s the limit’ for Mason Greenwood 12:07
Monica Seles: The warrior queen who could have been the best ever 11:25
Thrillingly fluent, thrillingly pointless: Man City’s riposte comes too late 08:54
World Athletics freezes out Russian athletes after $5m fine goes unpaid 08:41
Here is your handy guide to sport on television this week