Ireland confident as they take first steps on road to Tokyo 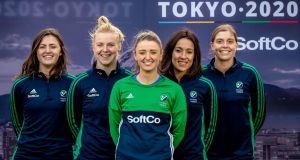 It’s is difficult to find a field game in any sport where an Ireland women’s team is ranked eighth in the world. The footballers are 31st. The rugby and cricket players are 10th and basketball is not listed in the international rankings.

Following last year’s World Cup silver medal, Irish hockey is at an all-time high, not just in the public consciousness but in their world ranking of eight. It is a position that will not only give confidence to the team but equally bring pressure as they face the Czech Republic, Malaysia and Singapore in three group games in the FIH Series.

It is the first part of a two-stage qualification for the 2020 Tokyo Olympic Games, an event the Irish women’s team has never reached.

On Saturday in Banbridge, Ireland take the first step along the Olympic road with their opening match against Malaysia, ranked at 22 in the world.

On Sunday the hosts face the Czech Republic, a young side with seven teenagers in the squad and ranked 19th in the world. On Tuesday the final pool match is against Singapore, the lowest-ranked side in the tournament at 35. There are then two crossover matches to decide final placings.

All those positive aspects aside, there remain some unknowns about how Ireland will perform. Coach Graham Shaw is gone, replaced by Sean Dancer, and three new faces come into the squad.

The loss of the tough and astute World Cup coach Shaw earlier this year to New Zealand means change in some form. Dancer has been appointed but will not be in charge for this event, which seems a sensible move for the sake of some kind of continuity.

Gareth Grundie, who has been acting as the interim head coach to the team, will continue in the position until the culmination of the series finals, although Dancer will be in attendance. Grundie was part of the backroom team at last year’s World Cup. Arlene Boyles, a familiar figure as manager of the team, and David Passmore complete the coaching ticket.

There is no doubt this will be a challenge and, depending on how the pool matches go, Ireland can at some point expect to face Korea, who are seeking their ninth successive Olympic Games qualification. Ranked at 11th in the world and in the other pool with France, Scotland and Ukraine, Korea had a disappointing World Cup and ended 12th out of the 16 teams in London.

On the pitch the three ranking points of a difference mean very little. Even Scotland, at 18 in the world, can on the day bridge a 10-point ranking gap.

Buckley takes the place of goalkeeper Grace O’Flanagan, who stepped away following her silver medal in London

With Sarah Hawkshaw, Bethany Barr and Emma Buckley coming in for more established names, there is pressure there too. Cork Harlequins’ Yvonne O’Byrne misses out, while the hugely experienced Nikki Evans, who this season played her hockey in Germany, is named as a reserve. More change.

Buckley takes the place of goalkeeper Grace O’Flanagan, a doctor, who stepped away following her silver medal in London. In that it will be interesting to see how much pitch time Buckley gets behind Ayeisha McFerran, who was named the best goalkeeper at the World Cup last summer.

Format: Two pools of four teams play each other. The pool winners qualify for the semi-finals. The two semi-final winners secure a place in the final and, crucially, a place at one of seven Olympic qualifiers, later in the year.

The full schedule can be found at fihseriesfinals.com